After defeat in the Europa League round of 16 against an FC Copenhagen side that you couldn’t say were anything more than competent at that level there was little more for Peter Lawwell to do than count the greenbacks due from participation in Europe’s second tier competition. celtic’s share of the pot was nearly 11 million Euros, which is not to be sniffed at but a long way short of the dosh that would have been handed out for a bit part in one of the Champions League groups. Slavia Prague was the club that eliminated Cluj (pause for unpleasant flashback to last ten minutes of the game at Celtic Park against the Romanians) and who helped themselves to 18 million for winning a meagre two points from their six matches.

The money earned by all of Scotland’s European entries last season is in the table below. The figures are for participation and results and don’t include matchday revenue or TV, which for Celtic would have been pretty good with an average attendance at our eight European games of around 52,000. Various bonuses are included in the figure opposite, including Celtic being awarded a million Euros for topping the group.

Prize money awarded to Celtic this season for the match against KR comes to €920,000.

Aberdeen will get another shot at the Europa League this season when they take on Runavik of the Faroes while Motherwell will hope to better Kilmarnock’s efforts from last year when they were humiliated by the Connah’s Quay Nomads. They play Glentoran.

Both enter at the first qualifying round. If they last until the second qualifying round they will be joined by Sevco. It would be churlish not to recognise the contribution to Scotland’s national coefficient last season. That said, they had a devilish amount of luck in the draw. They will be relying on the same this time round if they have any hope of keeping the bailiffs away from the door.

Winners in Q1 march on to the second round of qualifiers. Losers get Dusty Bin.

In the second round of qualifying for the Europa, due to be played on September 17th (another one-off behind closed doors) neither Aberdeen nor Motherwell will be seeded but Sevco will.

Meanwhile, chaos in klaksvik as Slovan Bratislava fail to show up for the rescheduled Champions League qualifier. This was the game originally due to be played on Wednesday but postponed  after the Slovan physio tested positive for COVID-19. The Slovakians sent a second squad to play the fixture made up of reserves and youth team players but a member of that squad then tested positive for COVID-19 as well. UEFA abandoned the match (the Klaksvik players were stripped and ready for action all the while) but haven’t posted an official verdict yet. The Faroese are packing their bags in anticipation of a trip to the Wankdorf next week to play Young Boys in what must be one of the most successful European campaigns in the history of Faroes football.

If the game is awarded then the second round now looks like this: 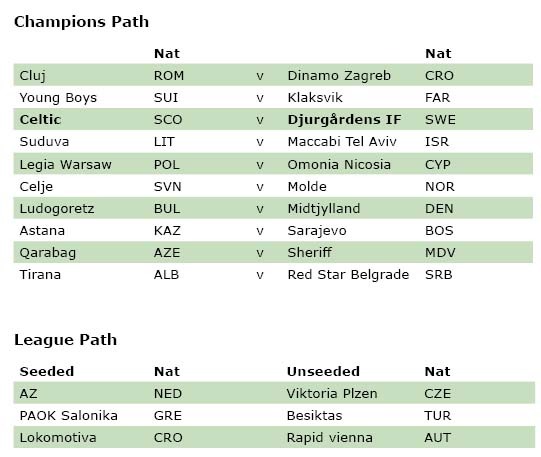