Speaking of football kits, if you went to the Christmas exhibition at the Tate Gallery in London a few years ago you would have seen one exhibit that was made up of 30 seasonal cards produced by some of the country’s “leading artists”. Prominent among the cards was one by Grayson Perry, featuring him and his family dressed in Rangers jerseys (they were still Rangers at that time) and eating Christmas dinner in McDonald’s. 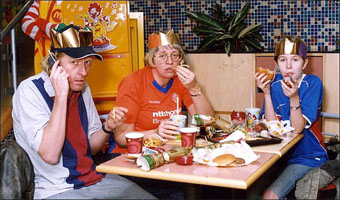 Nothing too surreal about that, as it looks like a pretty ordinary scene chez Mr. and Mrs. Averagebear.

Perry’s wife (seen here in the middle of the picture sporting a suitably lugubrious expression while stuffing a handful of indigestible carbohydrate stodge into her face and dribbling ketchup down the front of her Rangers top (who says method acting isn’t convincing?) is a psychotherapist (no shortage of homers I wouldn’t have thought) and explained the choice of team: “We bought the football shirts especially for the photograph. They were the cheapest, most reduced priced kit at JJB Sports.”

When Perry won the Turner Prize he was offered the option to borrow his wife’s Rangers top but opted for something else instead: 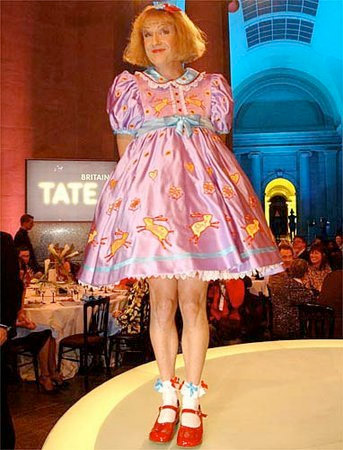 The thought of wearing that orange away strip for the occasion was clearly a riddy too far for the bold Grayson.