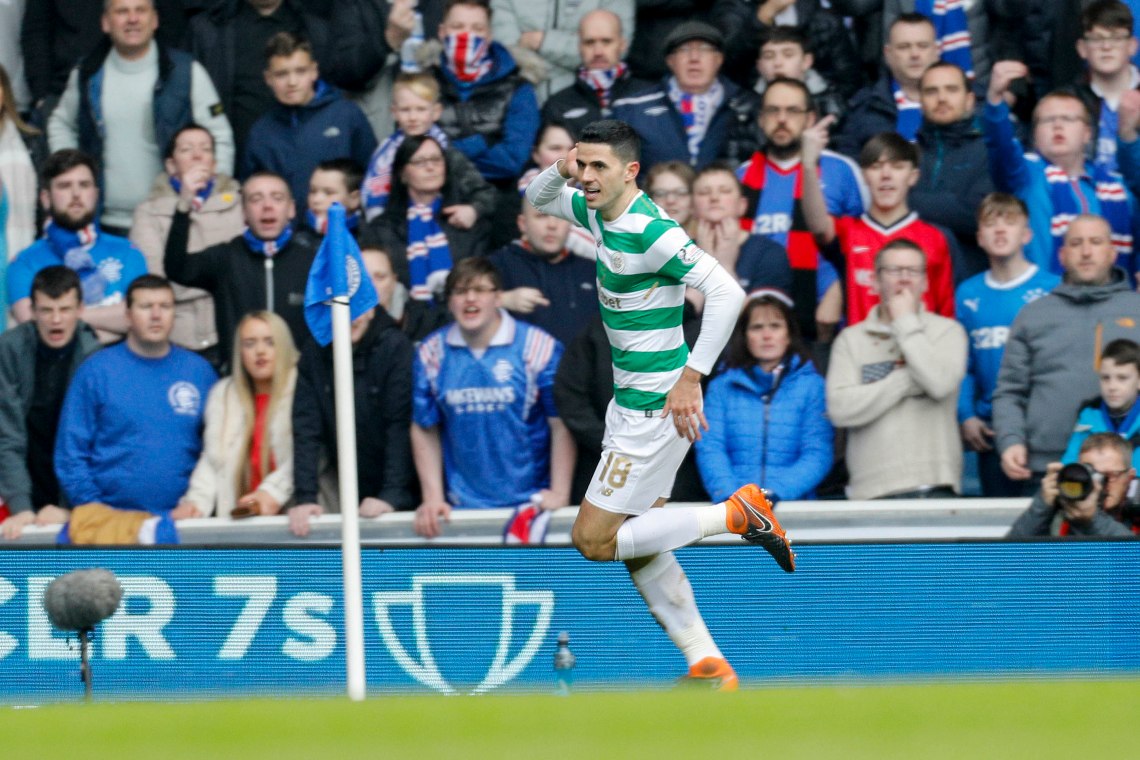 Good luck to all our players as the World Cup gets underway in Russia. An appearance at the World Cup finals might rightly be considered the pinnacle of a player’s career. This year Celtic will be represented by Tom Rogic, Mikael Lustig, Dedryk Boyata and Cristian Gamboa.

Ex-Celts John Guidetti, Jackson Irvine and Ki Sung Yeung will also be in the squads of their respective countries.

For a brief look at the Celtic’s links (however tenuous) with previous tournaments it’s over to the all-knowledgeable Tom Campbell and George Sheridan, who compiled this entry for their Celtic Encyclopedia:

Uruguay 1930: Jimmy McGhee, an outstanding Celtic player of the 1890s, emigrated to the USA in 1910 and his son Bobby played for the States in the first ever World Cup (scoring the second goal in the competition in a 3:0 win over Belgium). Incidentally, he also played at outside-left for the New York Giants against Celtic in the 1931 tour of America.

Italy 1934: Julius Hjulian, although a Swede by birth, played in goal for the USA against Italy in a 7:1 defeat. Julius had turned out for Celtic reserves in 1925-26, including a Second XI cup tie against Rangers.

Switzerland 1954: Willie Fernie and Neil Mochan represented Scotland against Austria (0:1) and Uruguay (0:7). Former Celt Tommy Docherty also played. The Celtic squad were taken to Switzerland to watch the competition and to learn from it.

Sweden 1958: Willie Fernie made his second appearance in the World Cup finals when he played against Paraguay (2-3). Bobby Evans and Bobby Collins played in all three matches that year, against Paraguay, Yugoslavia (1:1) and France (1:2). Evans became the first Celtic player to captain Scotland at a World Cup finals in the match against the French while Collins became the first Celt to score at the finals in the game against Paraguay. This was the 500th goal netted in the competiton since its inception.
In the same tournament Bertie Peacock appeared in every match for the surprisingly successful Northern Ireland team.

Germany 1974: Danny McGrain, David Hay and Kenny Dalglish played for a Scotland side undefeated against Zaire (2:0), Brazil (0:0) and Yugoslavia (1:1). A fourth Celtic player, Jimmy Johnstone, did not participate in any match although he had left the bench to warm up during the closing stages against Yugoslavia.
Wim Jansen represented losing finalists Holland in all their matches. Accordingly, three future Celtic managers played at this tournament.

Spain 1982: Jock Stein was the Scotland manager, while Danny McGrain, ex-Celt Kenny Dalglish and future Celt Alan Rough played in the tournament. Also in the Scotland squad were Gordon Strachan, Joe Jordan and John Robertson, all of whom would later take up coaching positions at Celtic Park.
Martin O’Neill captained Northern Ireland on their march to the quarter-finals and Dr. Josef Venglos was the coach of the Czechoslovakia national side.

Italy 1990: This was a vintage year for Celtic representation for Scotland with Paul McStay and Roy Aitken, ex-Celts Maurice Johnston, Alan McInally and Murdo MacLeod all featuring. Gary Gillespie came on as a sub.
Pat Bonner, Chris Morris, Mick McCarthy and Tony Cascarino played for the Republic of Ireland.
Lubo Moravcik turned out for Czechoslovakia (managed by Jo Venglos again) and John Harkes, who had been fielded for Celtic reserves, played for the USA.

USA 1994: Pat Bonner and Tommy Coyne were standouts for the Republic of Ireland while Tony Cascarino made a cameo appearance, as did Roy Keane.
Sweden finished in third place with Henrik Larsson having made five appearances for them.
John Harkes again turned out for the United States and Russia was captained by their goalkeeper Dmitri Kharine, who would sign for Celtic six years later from Chelsea.

Japan/ South Korea 2002: Two Celtic players played for Sweden in that year’s tournament, namely Henrik Larsson and Johann Mjallby, Larsson scoring three goals. The Swedish goalkeeper Magnus Hedman also later joined Celtic.
Henri Camara played for Senegal and it was his ‘Golden Goal’ that eliminated the Swedes.
One time Celtic ‘keeper Shay Given played for the Republic of Ireland who were coached by Mick McCarthy.
Du Wei was in the China squad and Maciej Zurawski played for Poland.
Juninho came on as a late substitute for Brazil in the World Cup final and picked up a winner’s medal.

Germany 2006: For Poland, Artur Boruc and Maciej Zurawski played well, as did Shunsuke Nakamura for Japan.
Henrik Larsson was still scoring goals for Sweden while his former strike partner Mark Viduka turned out for Australia.
Jan Vennegoor of Hesselink came on a a substitute for the Netherlands as did Thomas Hitzlsperger for Germany (he had played two games as a trialist for Celtic in 2000).

South Africa 2010: Giorgios Samaras and Ki Sung Jeung appeared in all three group games for Greece and South Korea respectively. Landry N’Guemo played one game for Cameroon (managed by Paul Le Guen) while Shunsuke Nakamura made one substitute appearance for Japan in a defeat to Holland. Edson Braafheid also made one substitute apperance when he came on for Holland in the 105th minute of the final to replace Giovanni van Bronckhorst.
Emilio Izaguirre played against Spain and Chile for Honduras and Efraim Juarez made two apperances for Mexico, claiming the distinction of being the first player to be yellow carded in that year’s tournament.

Brazil 2014: Emilio Izaguirre appeared twice for Honduras. Efe Ambrose played in all four of Nigeria’s games as they qualified for the knockout stage of the tournament, eventually losing to Argentina in the last 16. Giorgios Samaras did likewise for Greece, scoring a 93rd minute penalty against Ivory Coast in the final group stage game to take the Greeks through where they lost on penalties to costa Rica. Fraser Forster travelled to Brazil as part of the England squad but didn’t feature in any games.
Ex-Celts at the tournament were Landry N’Guemo (Cameroon) and Mubarak Wakaso (Ghana).
Kolo Toure (Ivory Coast) and Cristian Gamboa (Costa Rica) would join the club later.