Happy birthday Shunsuke Nakamura, our erstwhile legend of the free-kick.

Shunsuke Nakamura was a Gordon Strachan midfield stalwart for four seasons, scorer of some of the most thrilling goals we’ve see at Celtic Park in recent times and the man who gave the Parkhead DJ the chance to dust off his Vapors single (it could have been worse had he been a fan of that cringingly naff ‘Aneka’ – real name Bella McGlumpher or some such – record)

This was the transfer that we were all assured by the likes of the Rectumsport staff was not going to happen. Following the Artmedia nightmare it became very clear that Celtic wouldn’t be taking any part in the 2005-06 Champions League, therefore the logic of the Darylls dictated that without the lure of European football the man from Japan wouldn’t be interested in coming to Scotland in order to go mano y mano with Ross Tokely and the rest of Hammer Throwers Inc.

With clubs like Borussia Dortmund and Atletico Madrid sniffing about we were led to believe that the aforementioned DJ might be spinning ‘Jilted John’ for us over the tannoy. Yet, without indulging in too much of a crude national stereotype, the Japanese are nothing if not honourable, not to mention inscrutable. Promises had been made, and so it was that Naka came to Glasgow and made his Celtic debut against Dundee United on August 5th 2005.

First impressions were favourable, to say the least. His first touch was immaculate, he could find a team mate with a pass virtually every time he got the ball, he was able to keep possession and he played with his head up – and not up his arse either. By the standards of 90% of the SPL this put him on a par with Zico. Unlucky not to score on more than one occasion, his manager was quick to praise his Man of the Match performance. Naka himself, speaking inscrutably through his interpreter, declared himself to be reasonably happy with his contribution to Celtic’s afternoon, pledging to work on his cardiovascular regime in order to catch up with his team mates, some of whom were just finishing their second slice of pizza and wondering what he was on about.

Deployed mainly wide on the right of midfield by Gordon Strachan, despite having a left foot that stood comparison with Lubo, Naka went on to become a regular starter and was one of Celtic’s main creative threats throughout a season that he finished by picking up a Championship medal to go with the League Cup badge won the previous month.

The following season Naka became the first Japanese player to play in the Champions League when he turned out against Manchester United at Old Trafford. His growing reputation as a free-kick specialist was cemented that night when he scored a Naka cracker to bring us level at 2:2. It might have been enough to earn us a creditable away point had Giggs not conned the ref with an outrageous dying swan routine to win the home side a penalty.

Revenge was sweet in the return at Celtic Park, though. Once again Naka flighted home an amazing strike past van der Sar which seems to get further out each time you watch it. This time the Holy Goalie saved the mandatory United penalty and we qualified from the group stage for the first time.

Apparently, apart from endlessly practising inscrutable free-kicks at training in a manner best described as inscrutable, Nakamura also practises qigong to help his concentration and delivery at dead balls, a set of breathing and movement exercises often taught in association with Chinese martial arts. It seems that Qigong’s slow external movements help stimulate the internal organs by promoting the flow of the body’s internal energy or qi.

In between the games against United Naka had scored his first Celtic hat-trick in a 4-1 defeat of Dundee United at Tannadice – and not a free kick among them.

He won Goal of the Season that year as well for yet another memorable effort, this time chipping the ball over United’s Derek Stillie from somewhere near the touchline to secure a comeback point at Celtic Park.

His second league medal was secured when he won the game at Kilmarnock with yet another brilliant free-kick. The emotion he showed as he ran into the crowd swinging his jersey hinted that the mask of inscrutability might be in danger of slipping were he to hang around CP much longer. Later the same evening he won the SPFA Player of the Year award, followed in May by the Hacks award and the Celtic Fans’ award.

A knee injury picked up in the Champs League qualifier against Spartak kept him out for the first three months of the next season, but he was back by January to play his part in the run-in, most notably with arguably his best goal in the Hoops, a vicious swerving drive that left Allan McGregor looking as if he’d just had a night out in Loch Lomond with Bazza.

During his final season with Celtic he was definitely not the player of old, caught up in the general malaise and looking as if he had half an eye on his exit route. Before the January transfer window there was already speculation that he wanted to return to Japan in order to let his wee boy start school in his homeland and play out his final years for his first club, Yokohama. The fact that he ended up at Espanyol just proves what I was saying about him being inscrutable.

In his four seasons at Celtic he gave us some fantastic memories, some wonderful goals and provided the club with an exposure in Japan that must have been worth millions in terms of commercial spin-offs. According to David Thompson, Celtic’s former commercial director, “Celtic are now the third most popular Scottish brand in Japan, behind whisky and Sean Connery. Their popularity has even led to the creation of a word for Scot – “Scoto-rando-jin” – whereas in the past Scots were referred to as being English.”

It was easy to see why Peter Lawwell and the bhoys in the boardroom were eager to get Naka’s successor signed in order to keep the profile up in the far east. 140,000 Nike Hoops tops a year wasn’t to be sniffed at.

Nakamura left as still something of an elusive (nay, inscrutable) character, but he does come across as someone who enjoyed his experience at Celtic

If only he’d had an extra yard of space! 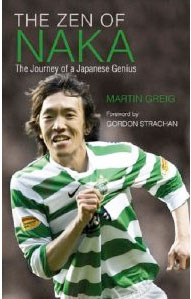 The Zen of Naka: The Journey of a Footballing Genius by Martin Greig; Mainstream Publishing; 240 pages (8 pages of colour pictures); £16.99 hardback

Far from your normal book about a footballer as Martin Greig tries to unravel the complexities of our very private Japanese midfielder.

His early life and football career are covered in detail, of course. Because Naka is so private, very little is known about him as a person (even in Japan) so it was interesting to find out about his upbringing, the reasons for his move to Italy then to Celtic and to get an insight into the dedication that has gone in to making him arguably the best technician we’ve had since Lubo.

As well as focusing on Nakamura, the author also gives us a fascinating overview of the development of football in Japan since the Second World War (and if you want to find out more you should get a hold of ‘Japanese Rules: Japan and the Beautiful Game’ by Sebastien Moffett). Greig goes to some lengths to interview the coaches and teammates who knew the young Naka, as well as tracking down Philippe Troussier, the man who left him out of Japan’s 2002 World Cup squad (a huge blow to the player).

Troussier’s interview is one of the highlights of the book, as is the resolve shown by Nakamura to get over this disappointment to get where he is today.

Also described in the book are the professional Naka followers, and what an eclectic, not to mention eccentric bunch they are, including the one who took up Scottish country dancing while a teenager in Japan, so fascinated was he with all thing Caledonian.

As Greig notes, “there are clear parallels with Henrik Larsson, even if Nakamura isn’t, yet, as revered. The Swede appeared cool and aloof when he arrived, but as the public admiration grew, so Larsson’s inscrutable veneer began to peel away and his charisma shone through – and so it is with Nakamura”.

Not your average footballer biography in more ways than one. I enjoyed it.