Signed by Jo Venglos in the dark days of autumn 1998, Vidar Riseth arrived at the club at a time when the knives were out for Jock Brown with the predictable result that the hacks did their best to underplay his signing in the same way as they don’t whenever the Huns sign any of their European journeymen.

At first sight he was one of those players who appeared to have ‘Squad Player’ tattooed across his forehead. His debut was a horrendous 1:1 draw with Hearts at Celtic Park where he was played on the left side of the midfield. While he didn’t exactly stink, it was clear that this was not another Henrik Larsson.

Riseth, more than most, possibly, suffered from being constantly shuffled from position to position, a la Mike Galloway, thus he never made any one spot his own, although latterly he seemed to have taken up residence on the subs bench.

Whether he possessed the talent to claim a starting place at Celtic was also up for debate. Wherever he was played at least you could never accuse the likeable Norwegian of never giving less than 100%. His full throttle style would often see him clattering into opponents before himself spiralling out of control like a demented Hollywood stunt man.

Unfortunately his proneness to accidents was not always confined to his tackling. One particularly unproductive stint at centre half saw him gift St. Johnstone a late winner by blasting an attempted clearance straight off the face of an onrushing forward. The ball promptly rebounded into the net.

He’ll be remembered by most Celtic fans as the man who scored the opener in the League Cup final 2000 against Aberdeen.

Others may remember him as the guy who had the necessary qualifications to accompany Kenny Dalglish in his tour of East End hostelries (straining like a dog on a leash by the looks of things as well) or as the one player who actually listened to those nutters in the stand whose coaching advice to the stars is “Just f***ing hit him”.

Against Rangers at Celtic Park that’s exactly what he did, flattening Reyna and getting second shot of the rubber duck (Mahe had already been sent packing).

He left Celtic in 2000 to join Munich 1860. He played 40-odd games for the Lions before rejoining Rosenborg in 2003, making another hundred appearances for them.

He signed for brief spells at Lillestrøm and Strømsgodset then retired in June 2010. The following January he announced that he was making a comeback. 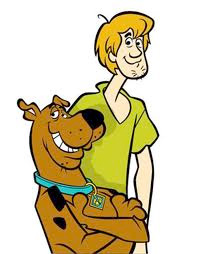 Above: Vidar and his dog, Scooby Doo.