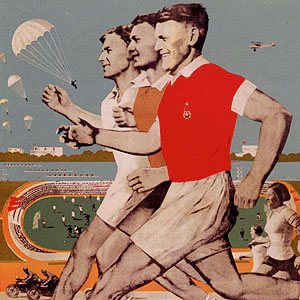 With the World Cup about to start you can mug up on your Russian football with some articles that appeared in NTV when Spartak Moscow came to Celtic Park for the deciding match of our Champions League Group campaign when we took a look at the history of Russian football and  the background to our Russian opponents and their city neighbours.

To think of Russian league football today brings to mind a sport run by wealthy oligarchs who are spending millions of dollars on bringing quality players from all over the world to compete in a league that regularly sees teams from its ranks qualify for the Champions League.

But following the collapse of the Soviet Union the game was in a parlous state. Soccer in Russia was up for sale.

Shabby market stalls occupied many of Moscow’s main grounds forcing teams to share stadia, while players raised their game only in the shop window of European football. The generation of Kanchelskis fled Russia for west European clubs, and the next one did not hang around for long.

In Moscow, fans faced a stark choice between paying to see action of variable quality at the big clubs, or spending the same money on winter coats for their children in the market outside the ground.

Corruption was rife. In the new ‘market’ economy, the balance of football power had shifted away from Moscow to the provinces, where Rotor Volgograd and Alaniya Vladikavkaz played to packed houses in modern arenas that put the capital’s marketplaces to shame – and nobody questioned where the money for the new grounds came from. Alaniya, the pride of North Ossetia, near war-ravaged Chechnya, won the title in 1995, and should have retained it a year later – they were beaten by Spartak Moscow in a play-off.

Spartak, the people’s team, were the only club to attract reasonable custom in the capital. Young Muscovites remembered little and cared less about the days of exciting domestic football in the old Soviet league, the break-up of the USSR having deprived them, and the older generation of fans, of classic battles between Moscow sides and top Ukrainian and Georgian teams such as Dynamo Kiev and Dynamo Tblisi. A modern indoor tournament, held in Moscow every January and involving the flagship teams of all the former Soviet republics. barely did history justice.

After its introduction by English mill owners in 1887, football slowly developed in Moscow and St. Petersburg with neither help nor hindrance from the ruling Tsars. City teams played each other in representative fixtures, but Russia’s vast distances and long, harsh winters stood in the way of rapid, nationwide growth – the Olympic team lost 16-0 to Germany in 1912.

After the 1917 revolution, the Communist authorities saw organised sport as a cheap way of keeping workers fit, disciplined and entertained. Although yet to be established on the factory floor, football had been part of the sports curriculum in Moscow’s better schools and colleges. The Moscow clubs Dynamo, Spartak, CSKA, Torpedo and Lokomotiv were quickly formed in the Twenties, and the first allSoviet league was organised in 1936.

Even then, football in this part of Europe was rarely ‘clean’. So-called agreed (dogovorru) matches, in which the outcome was little more than a formality, were a familiar trait under Communism, and two key figures, Spartak founder Nikolai Starostin and Torpedo star Eduard Streltsov, spent time in gulag camps for refusing to buckle under the authoritarian might of the KGB (represented by Dynamo Moscow) and the Red Army (CSKA).

International appearances were not encouraged until after World War II, when Stalin hoped to capitalise on the propaganda victories of Dynamo Moscow’s tour of Britain in 1945, and the Olympic team’s debut in 1952. After Stalin’s death, the USSR won soccer gold at the 1956 Olympics, encouraging the new Soviet leader, Nikita Khrushchev, to allow the full national team, the sbornaya, to play in the World Cup finals of 1958. Under captain Igor Netto, the Soviets bowed out at the quarter-final stage, but progress was clearly being made.

Two years later, the team won the first ever European Championship by beating Yugoslavia in Paris – although the scale of their achievement was undermined by the non-participation of the likes of England, Italy and West Germany in a tournament then seen as having little potential by the European football elite. The Soviets’ hero in Paris was their goalkeeper, Lev Yashin, a six-foot-plus giant dressed in black who would become his country’s most enduring footballing legend. A veteran of the 1958 World Cup, Yashin was still in goal when the Soviets finished as European runners-up in 1964 and as semi-finalists at the 1966 World Cup.

After the Sixties, however, the USSR would earn a reputation for being underachievers at international level, perennial ‘dark horses’ who faded before the final hurdle. Bad Iuck certainly played its part – shocking refereeing denied them in 1988 and the team travelled to ltalia ‘90 with an unfeasibly long injury list. But lack of support also took its toll. In those days whatever voices could be heard in the world’s stadia urging the sbornaya forward were those of diplomats and spies.

At club level. meanwhile, Moscow’s domination was being successfully challenged by clubs from outside the Russian republic. Khrushchev’s favoured team Dynamo Kiev, became the first non Moscow side to win the Soviet title in 1961. And while Russian clubs could only muster one appearance in a European final, the Ukrainians of Kiev and their Georgian counterparts, Dynamo Tblisi, would both win the Cup-Winners’ Cup during the Seventies and Eighties, as well as making an impact in other European competitions.

Ukrainian players such as Oleg Blokhin, Igor Belanov and Oleg Protasov formed
the backbone of the sbornaya until the squad was effectively disbanded by the break-up of the Soviet Union in the early Nineties.

After competing under the ClS (‘Commonwealth of Independent States’) banner at Euro ‘92, many top non-Russian players chose not to play for the newly independent nations of their birth, reasoning they would have a greater chance of honours if they represented Russia.. While the players’ decision reduced the Georgian and Ukrainian national sides of the time to the status of European minnows, Russia duly qualified for the 1994 World Cup but seven players, Ukrainian-born Andrei Kanchelskis included, then refused to play after a row with team management.

There was similar acrimony at Euro ‘96, when an intriguingly creative squad failed to deliver under the authoritarian rule of the former Spartak Moscow coach Oleg Romantsev, and were eliminated after the group stage.

Romantsev remained as manager of the national team to supervise their qualification campaign to the 2002 World Cup in South Korea and Japan and led them to first place to qualify directly managing seven wins, two draws, and a loss.

At the finals Russia were considered serious contenders to qualify for the second round. In their first game they beat Tunisia 2-0 but lost their next match to Japan 1–0 causing riots to erupt in Moscow. For their last game against Belgium, they needed a draw to take them to the second round. Russia duly lost 3–2 and were eliminated.

Romantsev was sacked immediately following the tournament and replaced with CSKA’s Valery Gazzaev. Tasked with leading the side to Euro 2004 Gazzaev’s task looked difficult as Russia’s group consisted of Switzerland, Republic of Ireland, Albania, and Georgia with the Irish considered favourites and an improving Swiss side as an increasing threat. Russia began their campaign with home victories against the Republic of Ireland and Albania. However, they suffered a major setback after losing their next two games away to Albania and Georgia which put Gazzaev’s career in jeopardy. He was promptly sacked after a disappointing draw with Switzerland in Basel.

Russia managed a 1–1 draw with the Republic of Ireland in Dublin before Georgi Yartsev was appointed manager. Yartsev managed to qualify Russia for a playoff spot with Wales after home victories to Switzerland and Georgia. In the first playoff leg Russia drew 0–0 with Wales in Moscow. In Cardiff, Russia emerged with victory 1–0 from a Vadim Evseev header to qualify for Euro 2004. The victory was overshadowed when Russian midfielder Yegor Titov tested positive for drugs. Amidst calls for Russia to be disqualified, Titov was given a one-year ban on February 15, 2004.

Russia were drawn in group A with hosts Portugal, Spain, and Greece. They became the first team officially eliminated after a 0-2 defeat to Portugal.

Yartsev’s reign ended in March 2005 after a 1-1 draw against Estonia in Talinn during the qualifying campaign for the 2006 World Cup, one of the greatest results in Estonian football history. Under new manager Yuri Semin, Russia were able to rekindle their hopes with improved results. In their final game theyneeded to win against Slovakia in Bratislava. A 0–0 draw saw Slovakia advance to the playoffs above Russia on goal difference. Russia finished third with 23 points and suffered their biggest loss ever, 7–1 against Portugal in Lisbon, failing to qualify for the play-offs.

Semin stepped down several weeks later and Russia began looking for a new manager. It was clear that a foreign manager would be needed as most of the high profile Russian coaches were not successful with the national team. On April 10, 2006, it was announced that then Australia manager Guus Hiddink would lead Russia in the Euro 2008 qualification campaign.

Successive managers included Dick Advocaat and  Fabio Capello, but despite the odd flash of success (semi-finals at Euro ‘88 for example), none of them managed to shake off the under-achievers tag. A nation of 142 million should not be struggling to beat Azerbaijan.

After the break-up of the Soviet Union, starting in 1992, each former Soviet republic organized an independent national championship. In Russia, the six Russian teams who had played in the Soviet Top League in 1991 (CSKA Moscow, Spartak Moscow, Torpedo Moscow, Dynamo Moscow, Spartak Vladikavkaz, and Lokomotiv Moscow) were supplemented with 14 teams from lower divisions to organize a 20-team Russian Top Division. The Top Division was further divided into two groups to reduce the total number of matches. The number of teams in the Top Division was gradually reduced to 18 in 1993 and 16 in 1994.

Since then, the Russian Top Division (and subsequently the Premier League) has consisted of 16 teams, except for a short-lived experiment with having two more teams in 1996 and 1997.

Spartak Moscow was the dominant force in the Top Division, winning nine of the first ten titles. Alania Vladikavkaz was the only team which managed to break Spartak’s dominance, winning the Top Division title in 1995. Lokomotiv Moscow  won the title twice, and CSKA Moscow three times.

In 2007, Zenit St. Petersburg climbed to the top, winning the title for the first time in their history in Russian professional football; they had also won a Soviet title in 1984. 2008 brought the pinnacle of the rise of Rubin Kazan, a club entirely new to the Russian top flight, as it had never even competed in the Soviet Top League.

Nalchik to Vladivostok – a 19, 392 km round trip by road. That’s what you call an away match (see the bus convenor if you want to reserve a seat).

From The Rough Guide to European Football