The news that the King has become a Sir brought back memories of the famous Bairds Bar press conference. Here’s how we covered it at the time (NTV issue 84). 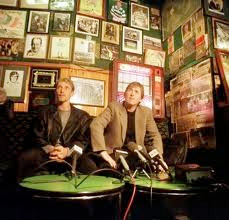 Firstly, Celtic FC would like to point out that holding a press conference in a pub will have no effect whatsoever on the content of said press conference and that even though inviting reporters into a bar is like asking Count dracula to look after the Blood Transfusion service, we fully expect business to be carried out as usual… along with a few hacks.

The team will be along familiar lines. Jonathon Goldie will be in goal and the two full-backs will be Jackie McNamarston’s and Tommy Bud. The centre backs will be Whyte and Mackay.

In midfield it will be Paul Lanliq, Regi drinker, Stilian Pernod and Lager Riseth.

The strikers will be Mark Vodka and Mark Bushmills.

That’s your time gentlemen. Finish off your drinks and move outside plaease.

Cheers is filmed in front of a live audience.