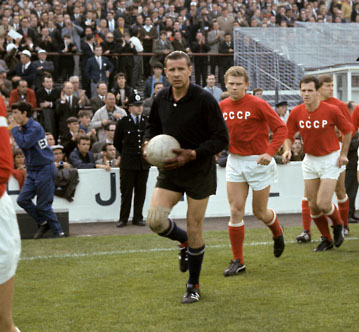 Few Russian club histories are as colourful as that of Dynamo Moscow. Their tale involves Victorian millowners from Blackburn, the founder of the KGB, Stalin’s henchman, the Cold War and one of the greatest goalkeepers in the history of world football.

Football first came to tsarist Russia in 1887 thanks to Clement and Harry Charnock, whose family ran the Morozov cotton mills in Orekhovo Zuyevo outside Moscow. Lifelong fans of Blackburn Rovers, the Charnocks formed a factory team and kitted them out in their beloved blue-andwhite. As the Russian game expanded at the turn of the century, the Morozovtsi won the Moscow league five years running before being renamed Orekhovo Klub Sport and relocated to Moscow itself. Once there the club quickly became a front for anti-tsarist activities, and it was these that attracted the attention of Felix Dzerzhinsky, the man who, after the 1917 revolution, would become leader of Lenin’s secret police – the forerunners of the KGB.

In 1923 Dzerzhinsky changed the team’s name to Dynamo Moscow, affiliating the club to the electrical trades’ union. But the VIP box at the open, functional and all bench Dynamo stadium, built in 1928, played host not to an elite band of electricians but to the hierarchy of Stalin’s secret police – among them his soon-to-be chief henchman, Lavrenti Beria. A keen Dynamo fan, Beria watched his team share prewar Soviet league titles with the Spartak side of his sworn enemy, Nikolai Starostin. Beria would subsequently be fundamental in arranging Starostin’s exile to the gulags.

Afer World War II the club would become the role model for secret police (‘Dynamo’) teams across the former Eastern bloc, from Berlin to Bucharest. Just as importantly, it was Dynamo whom Stalin sent to Britain in November 1945, for a four-match tour cloaked in fog, mystery and fast-flowing football. The team returned to Moscow in triumph, having won the first leg of Russia’s propaganda war with the West.

Star of the tour was goalkeeper Alexei ‘Tiger’ Komich. Four years later, Tomich was idly watching Dynamo’s ice-hockey team when his eye was caught by a promising goal-minder called Lev Yashin. Yashin was promptly converted to football, and would become the hero of the postwar Soviet soccer era, the very embodiment of success and sportsmanship.

Over two decades he played in three World Cups and two European Championship finals for his country, and led Dynamo to five titles and three cup wins. He was named European footballer of the year in 1963 – the first and so far only goalkeeper to attain the honour.

A one-club man, Yashin played his farewell match (between Dynamo and a FIFA World XI in front of 100,000 at the Luzhniki) in 1971.

After that he worked ‘upstairs’ at the club, even after he’d had a leg amputated as a consequence of a long-held knee injury in 1986. He died four years later, still a Dynamo employee.

Ironically, it was a year after Yashin’s retirement that Dynamo became the only Russian side to take part in a European club final, losing a Cup-Winners’ Cup clash to Rangers in 1972. After that there were two fallow decades before the dissolution of the Soviet Union in 1992.

Post-reconstruction Dynamo shared their peeling ground with CSKA, the army side down the road. The ubiquitous market surrounded the stadium, which was finally given undersoil heating in early 1997. The installation proved a mixed blessing: while it enabled Dynamo to continue their ground-sharing arrangement with CSKA, the heat scorched the grass. After a string of injuries, most notably to Russian international Omari Tetradze during a World Cup qualifier, Dynamo were forced to re-Iay the ·turf to provide a softer, safer playing surface.

At the end of the 2008 season, Dynamo finished third, and qualified for the 2009–10 Champions League preliminary round. This was the first time that the club had taken part in the competition, since its re-branding from the European Cup in 1992.

On 29 July 2009, Dynamo recorded a 1:0 away win against Tony Mowbray’s Celtic at Celtic Park, which gave them a strong advantage going into the second leg. However, Celtic comfortably defeated Dynamo 2:0 in Moscow to progress and send them crashing into the Europa League play-off round, where Dynamo were eliminated by Bulgarian side CSKA Sofia after a 0–0 away draw in Sofia, and a 1–2 home defeat.

Dynamo’s historical rivalry with Spartak originated in the late 30’s and it was the most important game in the Soviet Union for more than three decades, attracting thousands of fans to every game. Ironically on New Year’s Day 1936, a combined Dynamo-Spartak team traveled to Paris to face Racing Club de France, then one of Europe’s top teams. Shortly after Dynamo clinched the first ever Soviet League by beating Spartak 1:0 in Kharkov, in front of 60.000 spectators.

Spartak responded by winning the next championship thus starting one of the biggest sporting and political rivalries in world football. Following Dynamo’s decline in the late 70’s the heated rivalry has faded. After the collapse of the Soviet Union CSKA Moscow emerged as Spartak’s nemesis.

The Rough Guide to European Football