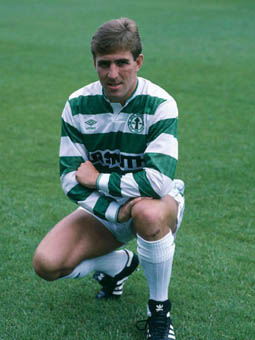 Another in our occasional series spotlighting some of the more unlikely heroes who have reserved for themselves a special place in fan folklore. Manfred Lurker recalls the Celtic career of Mark McGhee.

In the relatively goal-famished days for the Celtic forward line of the 90s it would bring a wee nostalgic tear to the eye dear reader to cast the mind back but a few years to season 1985-86. At that time Davie Hay could call on the services of Brian “Choccy” McClair, Alan “Rambo” McInally and Maurice “Bastard” Johnston as his strikers with Davie Provan, Paul Stay and Tornny Burns to supply the ammunition.

Why Davie never won everything in sight with players such as these at his disposaI will forever remain a mystery – but an even bigger mystery at the time was why on earth he went out and bouqht Mark McGhee from SV Hamburg for the princely sum of £150,000.

Not that McGhee was a bad player. Memories of the 1984 Scottish Cup final were still fresh in the mind. McGhee scored the winner for Aberdeen against Celtic 8 minutes into extra time. In fact McGhee actually won the sponsors’ “Mr Superfit” award despite having earlier gone down as if he had something tenninal when tackled around the throat area by Roy Aitken. Obviously fired up for the big occasion, Aitken got his marching orders while the “Superfit” award was to have a somewhat ironic ring to it for much of the remainder of McGhee’s playing career.

His move to Germany proved to be quite a disaster. A serious injury restricted his appearances in the Bundesliga and his subsequent loss of form did nothing to increase his popularity with a hard to please home support.

Taking a chance on his fitness, Davie Hay signed McGhee for Celtic on November 6th 1985 and he made his debut, in the hoops at Ibrox three days later.

Early indications as to the wisdom of Davie’s judgement were not encouraging. A turn of pace which made Frank Munro look like Ben Johnson after a handful of pills and the turning circle of a Chieftain tank – added to a 3:0 defeat – left the fans somewhat underwhelmed at the prospects of our new striker.

Yet here was a player I took an instant liking to. I think it was the expression on the McGhee coupon as he manfully chased every ball – loose or otherwise – pausing only to clatter into Ally Dawson a few times. once the lower jaw was clamped into position and the fists were clenched he set about, his task like a terrier; and had the teeth to
match.

The following week he made his home debut and looked more impressive, scoring both goals in a 2:0 victory against Clydebank. By the time December came around Hearts had established a lead in the championship and on the 14th of that month the Celts went to Tynecastle for a crunch qame. The Jamned Farts took the lead in 9 minutes through
Robertson and settled down to their usual tactics of ‘if it moves kick it and if it doesn’t move then kick it until it does’.

With 20 minutes to go it looked as if Celtic were going to let the gane slip away. However Mark McGhee had other ideas and scored a cracking goal in the 66th minute. It was the
first in a remarkable series of goals against Hearts which was to see McGhee become for them what Dixie Deans was to Hibs.

In those early days, though, comparisons between Celtic’s new corpulent striker and Marco Van Basten were decidedly premature.

Although he played his part in winning the championship that year, by the last game of the season at Love Street he had been relegated to the bench and for the whole of the next season he was plagued by injuries and loss of form. During the 86-87 season he started just seven games and appeared a further fourteen times as a sub. His final tally of one goal – scored in a 6:0 hammering of Clydebank, left him well behind in the race for the Golden Boot.

“He’s a fat useless turd”, was the customary reply.

It was difficult to keep the faith in the face of brutally forthright critique, but by the start of the Centenary season the winds of change had wafted throogh Parkhead and things began to look up again. Caesar was back, McClair, McInally and Le Petit Merde had all gone and Mark McGhee found himself as a first choice striker alongside McAvennie and Walker.

Three goals in the first three league games of the season, one of them against Hearts, saw him establish himself in the team and helped the Celts to the top of the league. But just when I felt emboldened enough to make the sceptics eat humble Parkhead pie injury struck again. However, despite being in and out of the side for much of the season he still managed to score in every league game he started against Hearts.

Fast forward to the Scottish Cup semi-final at Hampden, 1988. Celtic are a goal down with tine rapidly running out. In view of the opponents that day there was only one man to call on.

In truth, he walked on to the pitch late that afternoon to the football equivalent of the sound of his own footsteps; a few minutes later when his shot crept through eight pairs of Hearts legs into the net the cry of “He’s fat, he’s round, he’s worth a million pound, Mark McGhee”, rang out over the entire Celtic End.

The rest, as they say…

The following season was an anti-climax for Celtic but was M::Ghee’s most successful in the four he spent at the club. He scored two hat-tricks (v St Mirren 7:1 and Hamilton 8:0), one goal in a memorable 3:1 victory against the then existant Rangers as well as having another vintage season against Hearts with four goals in four games.

His last game in the hoops was against Rangers in the 1990 Cup Final victory bringing his medals tally with Celtic to two Scottish Cups and one League Championship (and the Dubai Cup!).

Billy McNeill sold him to Newcastle at the end of the season, where he was to team up with Roy Aitken again for a short spell. Billy bought Jacki Dziekanowski, who never scored nearly as many goals and couldn’t drink half as much vodka. It was widely rumoured at the time that Hearts had in fact paid the transfer fee on Newcastle’s behalf.