The fans in the standing area of Celtic Park have made it their mission to recreate the spirit of the Jungle, a section of terracing that became home to the noisiest, most fanatical and most passionate of our supporters. Most older Celtic fans will have vivid memories of bouncing up and down and singing in the Jungle. It was a part of the stadium that gave birth to legendary characters and stories, many of which were recorded by the late John Quinn in his book ‘Jungle Tales’ (Mainstream Publishing 1998). This one features an unusual protagonist sharing his memories of the night we won the league in 1979. 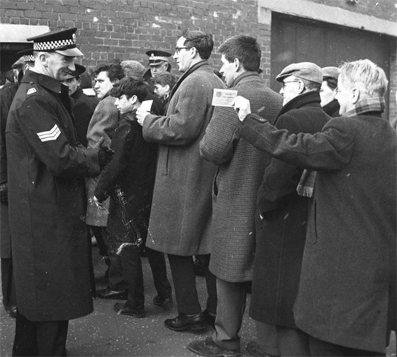 One of the perks of being a Polis in Glasgow is getting the chance of working overtime at football matches and, with a bit of luck, you might find yourself getting paid for watching your favourite team. That happened to me on very many occasions, but one of the most memorable was the Celtic v Rangers match at the end of season 1978-79. It was manager Billy McNeill’s first season in charge and at the end of a dramatic campaign Celtic found themselves needing two points to win the league in our final fixture. Rangers were also very much in the hunt and realistically only needed a point to clinch the title.

At that time I worked in the north of the city and a few days before the big decider my sergeant, who was a big Bluenose, told me, “You’ve won a watch wee man – you’re working at the game. Now, do you want the bad news? So am I, and I’m going to enjoy watching your team getting stuffed!”

The cop I worked with was also a Celtic fan and was told that he, too, was working at the match, although the chance of us working together was remote to say the least, if not downright impossible.

On the evening of the game the atmosphere in the city was electric, much more so than I had even experienced. There had been a build-up of tension for several days as the whole season hinged on this one result for both teams.

Anyway, when I arrived at Celtic Park I was told right away where I was working that night and I couldn’t believe it. My pal and I were paired together… and we were assigned to the North Enclosure – the Jungle. It was unbelievable, incredible, fantastic – for this was a night we prayed would be one to remember.

As we stood there keeping an eye on the crowds arriving and listening to the songs and the patter of the fans in the Jungle the excitement was growing by the minute. We could sense that this was going to be an extra-special occasion. Suddenly, I was aware of a presence behind me. It was our sergeant.

He resembled the Honey Monster from the TV adverts dressed in a Polis uniform – all six feet six inches of him. “Right you two, nae jumpin’ up and doon’ when the Gers score!” he joked. At least I thought it was a joke. If it was a joke it was his first. He had a strange sort of face. He was huge and his coupon was in proportion to his size but he wore a permanent frown like an undertaker and only his lower chin move up and down. He reminded me of a lugubriously over-sized version of Captain Pugwash.

It wasn’t long before the streetwise characters in the Jungle realised that my pal and me were Celtic fans. Perhaps it was our angelic smiles, or maybe that we were joining in with the singing – miming, of course!

Tomorrow we might have to give them the jail but that night an amnesty was in place.

The first half was a disaster and is better left at that. But soon the second period was underway and Rangers were a goal ahead. Worse still, that evergreen Celt, the late Johnny Doyle, had been sent off. The ten men buckled down, though, and fought back quickly, stepping up a gear. Roy Aitken equalised and shortly afterwards George McCluskey scored to put Celtic ahead 2-1. The excitement in the crowd was fantastic, one of the best atmospheres I ever experienced at a football game.

I suppose it was round about then that we were noticed, my mate and I. Let’s face it, the punters in the Jungle didn’t often get the chance to throw two Polis up in the air. But this was different, especially when they knew that the polis they were throwing about were just as ecstatic as they were about the score at the time. Once we managed to get our hats back from a wee wumman – she wanted to keep them at first on the grounds that if she hung them in her close it would keep the neds away – we were told by one of the jungle fans that our sergeant was trying to attract our attention.

There he was, out there on the track, pointing at us like Kitchener on those First World War posters. We were beckoned over to see him. As we went, hundreds of fans in the Jungle started singing, “Sergeant, sergeant, leave them alone!” This just made the big Bluenose even worse. He was seething by now. There were Celtic fans shouting encouragement to us: “Best of luck! Tell that big bastard where tae go! See ye at the next gemme!”

As we stood there in front of him like guilty men awaiting their verdict, we were given a lecture about letting the good name of the force down etc.

Then he delivered his judgement: “Make your way down to the junction of London Road and Springfield Road. Points duty.”

We were shattered. Right in the middle of the most important game for ages. As we trudged away he shouted after us, “I’ll see you both in the morning.” It sounded ominous.

Anyway, we took the long way round the track, hoping to savour the atmosphere a wee bit longer. Tomorrow was another day. Right now Celtic were winning a league decider against Rangers and we wanted to make the most of it. Besides, there were no motors about – everybody in the east end was at the game, or so it felt at the time.
As we approached the dugouts I glanced in at the Celtic backroom staff. Huge smiles were on every face, although it was still possible to feel the tension.

Then it all changed in a flash. In the few short strides it took us to pass the dugouts Bobby Russell made it 2-2 and all to play for again. It was going to be one of those nights.

We walked out of the stadium and into the car park. It was like night and day: bedlam inside and quiet outside. “Points duty at London Road and Springfield Road,” groaned my mate. “I cannae believe he’d dae this tae us.” But the big sergeant could, and he had, and we were out – away from the big game at a crucial time. It was desperate.

What we had suspected was true. London Road junction was like Aberdeen on a flag day. Dead. As we stood there having a post-mortem on the night’s events and wondering what awaited us in the morning an almighty roar ascended into the night sky above Celtic Park. It meant only one thing – somebody had scored. But who, how and for which team? Even the songs that filled the air minutes later failed to determine the answers for us, for it was just an ear-bending incoherent babble.

Just then a Rangers supporter came running along London road heading away from the park.

“Who scored?” I enquired, trying to keep the tone of my voice as impartial as possible, which was not easy under the circumstances I can assure you. “Jackson,” he replied. “Colin Jackson…”

My mate and I just looked at each other. I swear we could both see each other’s blood draining away. All this, and points duty, and having to face that big sergeant in the morning, to say nothing of the abuse we would take from our other colleagues. When will this pain end, I thought.

But the Rangers punter hadn’t finished. Still running, obviously trying to get as far away from Celtic Park as quickly as possible, he shouted over his shoulder, “… Aye, f’in Jackson. An own goal the big stupit bastard!”

My mate and I went daft. Like wee boys we celebrated by jumping up and down, hugging each other in the middle of the road – empty, thank God, although at that point we weren’t caring. If our sergeant had seen us then it would have been the salt mines of Siberia we would have faced, not London Road.

It was still not over, however, and minutes later another roar blasted the night air. But this time we soon knew what had happened as a tidal wave of Rangers supporters poured out of the stadium. The streets were flooded with blue and white scarves and the tears of the fans. They were inconsolable. A point would have done them and made them champions. But the unthinkable had happened and they had lost. This time it took a wee bit longer to find out who the late goal hero was as no one in blue thought to volunteer the information to two beat cops on points duty. We later discovered it was Murdo MacLeod whose late strike had made victory – and the championship – certain.

It was another hour before we were told we could go home. As we both stood in the Gallowgate waiting for a bus a supporters’ bus pulled up alongside. A happy Celtic fan leaned out and said, “Where to boys?” Incredible as it may seem, from that crowd of 52,000 it was one of the lads from the Jungle who had been throwing us up in the air a few hours earlier. The bus sang its way through the east end before they dropped us off, hurrying home to see the highlights on television.

Unfortunately there had been some kind of industrial action at the studios and we never saw the goals until much later courtesy of Celtic Films. Maybe that was a blessing in disguise as viewers might have seen more than the goals. The Chief Constable, or my mother – I don’t know which of them I feared most back then – might have spotted me and my pal being thrown up in the air in the Jungle followed by the Polis equivalent of the red card.