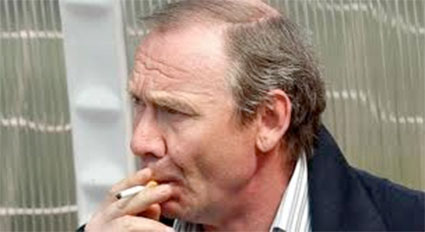 Oleg setting his players a fine example of how to keep in top condition for professional football.

“I played a joke on the players once,” recalled Oleg Romantsev, Spartak Moscow’s legendary 90s manager, speaking in 1998. The [last game of the] season had ended and we were on a charter-plane back to Moscow. I was sat on the last row, playing cards, and could see the flight attendants preparing the champagne.

“So, I pulled on this joke rubber apron someone had bought – it was in the shape of a woman’s breasts – and took a tray of glasses. From the rear of the plane I came first to Egor Titov [club captain and star midfielder]: “Champagne?” “Yes,” he replied, without looking, but as he turned I stuck the breasts into his face. In horror he raised his head and saw me. Egor fell into hysterics while I continued through the cabin. It was a huge success.”

A HARD MAN TO PLEASE

Yet Romantsev (a Russian Ferguson/Clough/Lobanovskyi figure all in one) was, at least 95 per cent of the time, a very different character as a manager.

Indeed, he was the classic disciplinarian, forever barking at his charges, screaming at them, demanding everything they had to give and then a little more.

Romantsev was not even a carrot-and-stick kind of manager – he didn’t much care for carrots, literally: “I grew up on potatoes, bread and milk. The cult of the meal is something I never did… For me food is a necessary process of introducing into the body proteins, fats and carbohydrates.”

And in a way, that is Romantsev in a nutshell: simple efficiency. Anything that cannot contribute to the overall good should not even be countenanced. They may as well not exist. “I did not really need my wife’s wonderful cooking,” he said.

Romantsev would set about his task as manager with an obsessive zeal, often pouring over his squads’ every mistake, usually ignoring any positives from their performances.

By doing so he created an atmosphere of heightened tension where no player felt that they could ever relax – unsurprising, maybe, for a man who, legend has it, only ever slept a maximum four hours per night and would read five books every day.

And that same player who was laughing so hysterically at Romantsev’s tomfoolery that night in the plane, Egor Titov, is the same man who told Marc Bennetts (author of Football Dynamo) that the reason he, arguably Spartak’s best midfielder of the 90s, never left the Red-Whites despite strong interest from Bayern Munich, was because, “Honestly? I was afraid to go to Oleg Romantsev’s office and tell him I was leaving.” Titov’s laughter was, perhaps, rather more than a little nervous.

Indeed, Romantsev was an intense, unbending, morose, difficult and eccentric character, often all at once.

A classic tale is one that tells of a Russian journalist approaching Romantsev, smoking a cigarette all alone next to the team bus, and asking him for a few words. “What?! Can’t you see I’m talking to the doctor?” snarled the manager in reply.

THE SPECIAL ONE (Mk.I)

Despite tales of rubber breasts, Oleg Romantsev was mostly an extremely stern and frankly rather intimidating, chain-smoking, omnipotent kind of presence. Omnipotent being a particularly apt word.

He ascended to the role of Spartak manager in 1988, landing the championship at his first attempt. By 1993, after a second league title the previous year, he was elected by the players as president of the club when former chairman, Konstantin Beskov, fell out with Nikolai Starostin – Spartak’s founding father. He then went on to win the 1993 championship in his dual role.

Now in a unique position of strength (the only person who could sack Romantsev was Romantsev) and with three championship titles in four seasons, he set about creating what some critics have argued as the greatest club side Russia has seen, certainly the greatest the Russian league has ever seen.

And he did it with a ruthless develop-and-sell policy, based on an extraordinary nose for spotting talented youngsters from all across the former USSR, that could put Fergie to shame. According to Jonathan Wilson in, Football behind the Curtain, “at one point, player sales accounted for 70 per cent of their [Spartak’s] annual budget.”

Egor Titov, Ilya Tsymbalar and Andrei Tikhonov (who actually both left Spartak due to fallouts with Romantsev), the Dmitrys Khlestov and Ananko, and Vladimir Beschastnykh’s were the few that lasted most of Romantsev’s 15 years at the helm.

Over those fifteen seasons, he amassed nine league winners’ medals (in addition to the one he won as captain of Spartak in 1979) including three in a row from 1992-1994, twice by 11 points, and then one every year for the five seasons between 1997-2000.

And really that should read six seasons, for a Romantsev squad in all but formality won the 1996 Championship too. The man himself (who had also been Russia manager since 1994) was on national team sabbatical, with Euro96 in mind, at the time, but his number two, Georgi Yartsev, stood in for him that year, landing top spot by virtue of a playoff game with Alania Vladikavkaz.

Combined with an ability to constantly build and re-build his sides, cashing in on his stars to create constant revenue at a time when Russian clubs were still struggling to get to grips with the new fangled idea of capitalism in sport, Romantsev also implemented notoriously harsh training sessions.

Usually held in camps, these infamous sessions are known as “sbori” in Russian and inspire icy dread in even the most hardened Russian pro. But under Romantsev, the sbori became an even more fearsome beast that, according to numerous Russian journalists, resembled something from a Special Forces regime.

To use the old cliché, Spartak were ruled by an iron fist. Only, it turned out that Romantsev was mortal too and on Thursday 19 June 2003, the untouchable man was sacked.

For many a year since taking up the reigns at Spartak, Romantsev had been marked as the chosen one. Starostin even referred to him as ‘Golden Boy,’ and upon Starostin’s death in 1996, Romantsev inherited Spartak Moscow lock, stock and barrel.

But the honour was really a terrible burden for just one man – even if that man was Oleg Romantsev. And, with being national coach to boot, Romantsev’s health was already nose-diving as the millennium approached.

For the next three years Chervichenko became the object of Romantsev’s mounting ire, often accusing the new chairman of not respecting Spartak, all at a time when Romantsev’s long-assumed drink problem became an open secret: “The once genius trainer descended into an alcoholic haze, detached from reality and the players around him,” wrote Bennetts in Football Dynamo.

For a while the results kept coming. Just about. Romantsev’s ability could still pierce the vodka-fug and he managed to bring home league titles in the first two years under Chervichenko.

But where once the margins between first and second were great (twice between 1992-1994 Romantsev won the title by 11 clear points), Spartak were now scraping over the line.

But once Romantsev assembled a group of journalists on the eve of the 2003 Russian Cup Final to announce that Chervichenko had been trying to throw the result for $1.5m, Romantsev had crossed the line finally and fatally.

After his sacking Spartak had six managers in six years. It’s said that Russian footballers can only perform if someone brings a strict order to their life, the more rigidly imposed, the better.

True or not, what cannot be disputed is that none of those six managers won a single title between them to ease the passing of a man who won nine – plus four domestic Cups, won a club record 401 games as manager and reached the semi-finals of the European Cup (1990-91), the Cup Winner’s Cup (1992-93) and the UEFA Cup (1997-98).