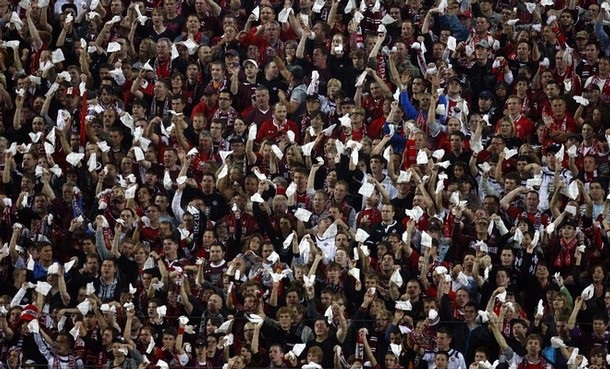 This was a disaster waiting to happen. The one that we dared not lose. And we lost it. Ironically, it was the Zombies that put the final nail in R0nny Deila’s coffin.

Today we were outplayed in the first-half by a Championship side. Appalling. However, even though Celtic played much better for the rest of the contest, I had absolutely no confidence that we would do it.

Sometimes the Footballing Gods are against you, however this mentality shown today is down to the manager, who picked this afternoon to have one of his worst tactical showings to date.

Sevco were allowed to play with the ball in front of us but they didn’t muster a single shot after the interval until McKay’s screamer in extra-time. I can live with that, but so often we were left devoid of ideas on the counter-attack. Any average fan could have spotted that, yet the guy who’s paid to fix it just waited.

For all that this will be hailed in the media as some kind of world-shaking beating, Celtic could have won this game. We had the chances to win it. But it’s time to look at the bigger picture – Deila apologists pay particular attention.

Last season we had two crucial away games at Pittodrie. We won them. This season – Beaten twice.

Last season we dropped into the Europa League and put in a decent display culminating in a post-Christmas knock-out tie against Inter. This season, not even a single victory at Celtic Park and beaten home and away by Molde.

Last season we had a January transfer window in which we strengthened and galvanised the team in order to get over the line. This season we weakened it and we’re still not home and dry yet.

The reason for all of this is simply that Deila has lost the squad. They’re basically a talented squad that any competent manager could have won a domestic trophy with this season.

But Ronny Deila isn’t any manager. Penalties is a hard way to lose it but, as unpredictable as they may appear, the mentality of a side is what ultimately wins on these occasions. Look at Hibs in the first semi-final; they knew they had a goalkeeper who had been unbeatable all game – so did Dundee United.

Celtic just never seemed to have the belief that they were going to win it, even when the Zombies were there for the taking.

There’s no question now that this was the final straw for Deila. He will definitely not be in charge next season and it is doubtful even that he will get the pleasure of lifting that league trophy, assuming we win it.

It’s amazing what can happen when a club has everyone pulling in the same direction. I hope everyone is on the same page at Celtic now as well.

Player Ratings out of 10:

Gordon 8 – Probably the only reason we got to penalties. Didn’t put a foot wrong. Superb first half stop. Blameless for the goals and made a good save in the shootout but could have maybe done better with McKay’s penalty.

Tierney 9 – Fought tooth and nail to get us back into the match. Captain material from this young man.

Mulgrew 7 – Good display from Charlie. Thought he was finished in the Hoops but recent displays have convinced me otherwise.

Boyata 4 – Looked like a rabbit caught in headlights whenever he was on the ball. Substituted early on with an injury. Probably for the best.

Lustig 6 – Solid and industrious. Ran the channels for ninety minutes although end product should have been better.

Bitton 5 – Once again never looked to create or defend. Put in a shift but his passing was truly dreadful at times. Pretty useless after injury set in.

Brown 3 – For a captain, in a match like this, to perform like that is unacceptable. Couldn’t pass wind, couldn’t tackle, useless on the break. Just a shocking day.

Roberts 4 – Had the beating of his man for most of the first half. Can pass a ball but chose not to on too many occasions. Predictable and spent by the final whistle.

Griffiths 5 – Good out-ball for Celtic. Had chances and looked lively but couldn’t get support from his team-mates. Unlucky today not to score with two efforts that hit the woodwork.

Sviatchenko 8 – Today might have been so different had he started. Solidified defence and dragged the team back from a goal down.

McGregor 6 – Grew into the match in extra-time and came close. Superb ball into Rogić which may have been the difference.

Rogić 7 – Made a superb contribution and caused the Sevco defence all sorts of problems, not least the goal. Didn’t deserve to miss the penalty although he missed it before he’d even placed the ball.