2004 signalled the end of an era at Ibrox and the Laptop Loyal were out in force to praise Caesar and not to bury him when the news broke that Murray was apparently stepping down as chairman of Rangers.

The hacks dutifully lined up to kiss Dave’s regal butt goodbye and no doubt many shed a lonely tear at the thought of no more cosy chats by the fireside in the oak-panneled office in Charlotte Square while having their tummies tickled and being supplied a steady stream of Bonio and science fiction copy for the early editions. 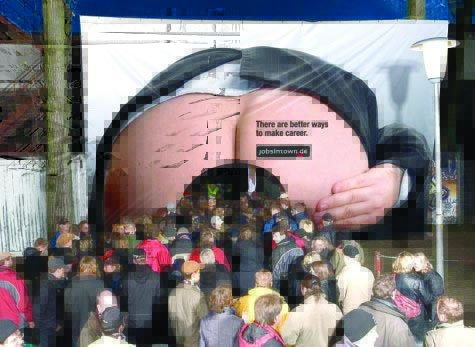 True to form the party line was trotted out with all bar a few falling over one another to offer simpering tribute to the man who had almost single-handedly brought the cash-strapped club to the edge of a financial abyss.

According to Murray his reasons for going had nothing to do with Rangers’ financial predicament nor their inability to trade their way out of a deficit which stood at the time at around £51 million with more debt to add to the stack on its way. “David Murray yesterday stepped down as chairman of Rangers – before he turned Ibrox Park into Jurassic Park,” wittered Keith Jackson in the Daily Rectum, a reference to Murray’s quip that he was leaving before he became a dinosaur. If only he had known at the time how apposite that metaphor would become as extinction lay a few years in the future.

Losses of £80 million over the previous five years – and that was counting the £60 million ‘investment’ from assorted sources – were not mentioned as a group of hand-picked hacks sat through Murray’s valedictory in his Edinburgh office before the rest of the lumpen proles began picking through the wit and wisdom of the retiring chairman.

“Murray has grown tired of the predictability of the Scottish game,” wrote Rob McLean in his hopeless column in the Sunday Mason. Presumably this predictability only started to tire him out when it was Celtic who started winning the league on a regular basis again, since there was no mention of it during the Rangers nine-in-a-row period. Rob went on to explain that as well as Murray finding the Scottish game so dreary, “He’s given up squabbling with the so-called decision makers at the other SPL clubs … having become exasperated at their failure to focus on the big picture he sees so clearly.”

Without enlightening us as to what exactly the big picture was, it seemed that Murray had decided to exit stage left before he came a cropper in the third act. “Football is entering a very difficult period. The game is not going to be as expansive as it was and cutbacks and penny-pinching are not my style,” said Murray at his press conference, leaving the bloke who was coming in to sort out his mess very much holding the bad news baby. Mind you, he had already been broken in gently by having to host the previous Rangers AGM, the one where Murray was getting all stroppy about how much of the deep doo doos they were actually in.

While not wishing to dwell too much on the financial side of things for once (he was normally a bit more forthcoming when news of new investment was being announced – together with plans for world domination) Murray did say, “We are no different to Bayern Munich or Barcelona the way we are run.”

The manager of the Munich branch of Deutsche Bank must have had heart failure when he heard that.

No. Enough of that nonsense. Far better to portray Murray as disappearing into the sunset, bound for his millionaire’s paradise in his private jet but ready to land on Edmiston Drive if necessary should they ever send up the bat signal for more dosh.

“Perthshire, Jersey and now France offer retreats from SPL rows, transfer speculation and sectarian arguments, with a private jet waiting on stand-by should Alex McLeish assemble another decent run in Europe,” wrote Peter Jardine in the Daily Mail, clearly beginning to confuse Murray with fictional characters like James Bond. An easy mistake to make though when the Ibrox tycoon spent so much time hanging out with the big knobs.

Even Darrell King in the Evening Times, normally such a model of restraint and objectivity, was beginning to get a bit carried away: “The CV for the position should have included owning a private jet and having a former James Bond as one of your best friends. John McLelland has neither but he’s now landed the position as David Murray’s successor as chairman of Rangers, one of the most powerful and prestigious posts in European football… Lunch in Monaco with David Dein and his club manager Arsene Wenger, transfer talks with Juventus supremo Roberto Bettega and a blether with Barcelona president Joan Gaspart or 007 star Sean Connery are all regular occurrences in a Murray week. Murray has never pleased all of the Rangers support but when it came to pushing the boat out – or his private jet – then he very rarely failed to get his man.”

I imagine his chat with Roberto Bettega might have been along the lines of, “Ah David, remember we humped you 8-1 on aggregate in the Champions League a few years ago?”

Murray was also, we were told, going to channel his energies into his other business interests, one of which was reported as “waste disposal”. Maybe he could have combined the two and tried to offload Tore Andre Flo and Michael Ball as a homer?

Still, it couldn’t have been easy, even for someone with such inexhaustible wealth as DM. “Being chairman of a football club can seriously damage your wealth”, as he said himself. “I have put £50 million into the club myself”, he was quoted as saying in most of the papers, although the Herald had it written down as, “I have used between £45 million and £50 million of my own money in my time with Rangers.” Quite a difference between that and “pumping” cash into Rangers’ coffers.

As for the exact figure? Well, what was five million quid between friends and bank managers?

As he accepted the plaudits for this investment over the previous fourteen years Murray neglected to mention a few people who had helped him along the way. NTL were involved in some kind of £30 million write-off, ENIC invested £40 million and Dave King £20 million. Perhaps they deserved more credit, since the value of their investment had gone down as well as further down until finally it disappeared into a stank.

And of course credit had to go to the Celtic Board under the Kellys and White. Without the Kale Crunchers in place surely they would never have been handed six leagues of a start.

No chairman of any football club in history has ever found himself the subject of so many toadying newspaper articles than David Murray, but even he must have cringed when he saw the likes of Andy Devlin of the Sun in action: “Mo Johnston looked long and hard into David Murray’s steely eyes and knew immediately the pair could conquer 100 years of bigotry and hate.” If you want to check out how successful Murray and Mo were then listen to the ecumenical hymns being sung at the next Ibrox home game.

Without ever wishing to accuse the outgoing Rangers chairman of being in any way selective with the facts or economical with the truth (or even ecumenical with the truth) NTV tended to go along with Glenn Gibbons’ take on events as it appeared in the Scotsman: “It does not take the kind of leap that made Rob Roy a legend to arrive at the conclusion that the departure of Rangers’ majority shareholder from the chairmanship is unlikely to have been wholly voluntary. Nor does it require informed sources to highlight the suspicion that Murray’s willingness to quit after 14 years may be at least partly the result of a nudge from external sources. When liabilities mount to the level of those which currently haunt the Ibrox club – the last annual report revealing debt of £51.7 million – whoever is running the company is no longer playing with his own, or even the investors’ money, but with the bank’s. In such a climate the main creditor must surely get their way.”

Let’s finish with our own tribute to the departed fuhrer. We’ll forget all the idle boasts about how Rangers were going to rule the world (see ntv 98) or how Murray was going to spend a tenner for every fiver Celtic spent. We’ll even forget that for a man who prided himself in doing deals in the transfer market, often, it seems, without his manager having a clue what was going on, he had been responsible for more than a few shockers, crockers and limpy walkers in his time (by the way, imagine how the chip wrappers would have responded to such interference in team matters by, say, Fergus McCann).

Instead, we’ll leave the last word to Murray himself.

In May 1997 he bragged that, “We have to deliver a European trophy within three or four years or be challenging regularly in the Champions League. If we are not doing well in that timescale I will consider my tenure to have been a total failure.”

M’lud, the prosecution rests its case. 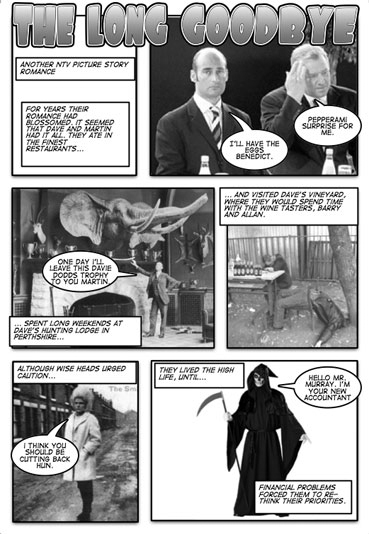 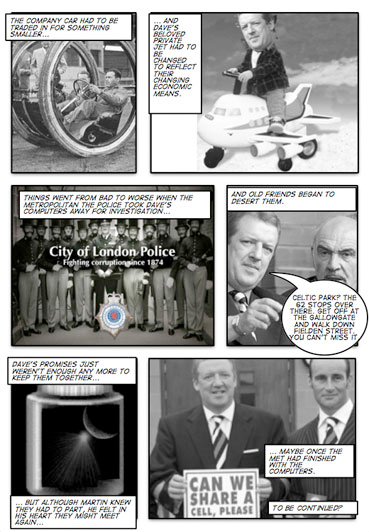