With ‘Celtic – The Musical’ about to hit the stage later this year,  Marmaduke Baglehole looks back at some of the club’s past offerings on vinyl.

Apart from the huge number of books, magazines and publications – both official and unofficial – devoted to Celtic throughout the club’s history, there remains one genre of memorabilia which has passed by largely without comment, even though it has left us with some of the most surreal and bizarre examples of Celtic folk culture imaginable.

I refer to the large catalogue of musical meisterwerke laid down on vinyl for posterity, few of which, to our great disappointment, ever featured on The Old Grey Whistle Test.

Although the vast majority of recordings concerning Celtic have been produced and released by artistes (and I’m using the term very loosely in some cases) independent of the club, from time to time the men in the marketing department’s think tank decide it’s time we had an official club record.

The most recent release from Celtic was a very glitzy CD which, mercifully, did not contain any tracks sung by the players. But ‘twas not ever thus. The idea in the past seems to have been to record something to play over the Parkhead tannoy as the team was running out of the tunnel; a rousing anthem along with which we could roar the Bhoys on to victory. The results over the decades have been, to say the least, patchy. 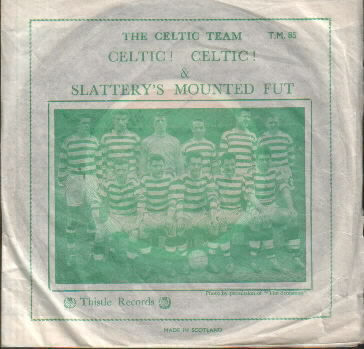 The imaginatively entitled ‘Celtic! Celtic!’ was allegedly sung by the first team. It was released as a 45 in a picture sleeve with a team photo on the front and autographs on the reverse. Brian Epstein had to be heavily sedated when news reached him that the Celtic record was being delivered to the record shops at exactly the same time as ‘She Loves You’ by some obscure Liverpudlian beat combo, but although John, Paul, George and Ringo were shitting themselves, as far as we know sales of the Fab Four’s disc were not terribly adversely affected by the Tuneless Twelve. With the writing on ‘Celtic! Celtic!’ credited to someone called B.King (BB King using a pseudonym perhaps? Or even Billy King??) it became an instant hit with the denizens of the Jungle and can still be heard being belted out to this day:

On the label in the middle of the disc the team, Fallon, Young and Gemmell etc. are neatly lined up in 2-3-5 formation a la the style of the match programme of the day. As a wee bhoy I could never take my eyes off this label every time it was on the turntable.

Little did I realise it at the time but during my early adult years I would have to spend a great deal of my Saturday afternoons watching assorted Celtic teams going round in ever decreasing circles.

The B side was a stirring rendition of a number entitled ‘Slattery’s Mounted Fut’, both an unusual choice and a quaint way of spelling it. Musical accompaniment for both tracks was provided by an accordion and a snare drum, while the footballers themselves sound as if several of them were singing with their balaclavas on back to front – which was probably the case.

The same accusation could never be laid at the golden tonsils of Glen Daly, Mr. Glasgow himself, who in 1961 recorded THE classic of all time, ‘The Celtic Song’.

Penned by Liam Mallory (more on this subject in a future post) and released on the Piccadilly label, its enduring charm can be attributed partly to the sentiments expressed in the lyrics, of course, but equally to the unique nasal style of Mr. Glasgow, oft imitated but never equalled.

The B side on the version we have is entitled ‘An Irishman’s Dream’ but this may differ on later pressings.

Although not recorded by the players it was quickly adopted as a quasi-official anthem by the club which is why it’s included in this section. What more can be said about this record other than, ‘Darn the hair I care’.

By 1970, with the European Cup and umpteen other trophies neatly lined up in the cabinet, the Celts were becoming somewhat more strident and triumphalist in their approach to this kind of thing, and the players got together again to sing (if that’s the right for it) on ‘Celtic Are Here’, modestly proclaiming that they were ‘The greatest team on Earth’. Written by Tonner and McGuire – Celtic’s answer to Rogers and Hammerstein – the backing band, by comparison with earlier efforts, sounds like Henry Mancini and his Orchestra. The highlight of this number is an amazing instrumental break near the end which I defy anybody to listen to without picturing the first team descending a giant flight of stairs dressed in top hats and tails while the Tiller Girls perform a Busby Berkeley routine.

But the surreal quality of this 45 doesn’t end there. The B side features a solo by none other than Jimmy Johnstone. Someone (possibly Tonner, or even McGuire) must have heard Jimmy singing in the team bath and persuaded him to record the romantic ballad (I kid you not) ‘Passing Time’, an ironic title indeed considering Jinky could keep the ball all day if he felt like it. This is Tonner and McGuire in a more contemplative mood:

Quite profound, I’m sure you’d agree, but not exactly the kind of stuff to get the Jungle excited on a Saturday afternoon. Sadly, not even Jinky’s greatest fans ever suggested he hang up his boots in favour of a career as a crooner.

To celebrate the double winning season of 1976-77 the first team squad were back in the studio again to record a double A side single featuring ‘Over and Over’ – which has shown remarkable durability in the fans’ repertoire – and the largely forgotten but imaginatively entitled ‘Celtic’. Production values on this effort are a quantum leap away from the 1961 official team record, although the singing of the players still brought a tear to the eye of anyone connected with the Glasgow Orpheus Choir. 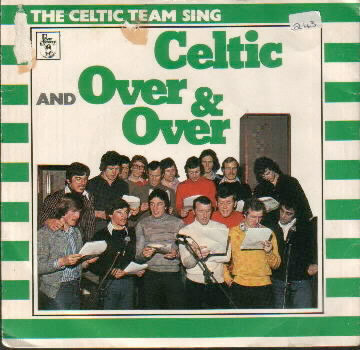 It was released in a colour picture sleeve depicting all of the guilty men kitted out in the height of 70s casual chic, which meant more tank tops than a Walter Smith dressalike convention and pointy shirt collars so big that the wearers were in danger of taking off into the wild blue yonder in a high gust of wind. Judging from the photograph, some of the players looked as if they were approaching the idea of recording a potential hit single the way press ganged sailors used to regard a spell in the navy (see Wilson, Paul), while those at the opposite end of the scale appeared to be throwing themselves into it like the Clash at Che Stadium (see Edvaldsson, Shuggie).

Significantly, two players do not appear to be singing at all, namely Kenny Dalglish and Alfie Conn. Kenny departed Celtic a few weeks later, obviously upset at the crap standard of singer he had around him at Parkhead and needing the challenge of a concept album to himself, while Alfie just looks as if he’s trying to crawl inside an amplifier.