Do any of my devoted readers (either Sid or Doris) remember Nick Peel? Once upon a time he was a retail director at the Death Star until in 2005 he, “resigned to pursue other business interests.” (a job at that familiar elephants graveyard of ex-Ibrox employees, Tynecastle, under Campbell Ogilvy, as it transpired). Peel’s valedictory in the Scotsman included the paragraph, “He also piloted negotiations on the proposed creation of a casino development on the doorstep of Ibrox Park.” Where did he pilot it to – the Bermuda Triangle?

Anyway, Nick’s remit was to develop the commercial side of things, and in an interview with the Scotland on Sunday back in the days when Scottish newspapers would slavishly reproduce Rangers propaganda stories (Thank goodness that doesn’t happen any more, eh readers? Sarcastic Ed), he explained how he was constantly being approached at the time by companies desperate for the then still existant club to endorse products, most of which he knocked back. The Death Star version of the Dragons’ Den apparently booted out such sure-fire money-spinners as, “Rangers toilet seats, toothpaste, plasterboard, hearing aids, contact lenses and condoms.” (You can do your own jokes for most of them, I’m short of column space).

I can’t help thinking that the present lot that are in charge of sucking the marrow out of Sevco must be looking at that list and thinking, “Hey, there’s some cracking ideas there – if they’ll buy shares in a dead football club they’ll buy anything!”

One pitch that Nick threw out – that the Sevco board might like to resurrect – came from a west of Scotland undertaker. The funeral director in question wanted to offer Death Star denizens the chance to cross over to the spirit world in the comfort of their very own Rangers coffin. Peel was quoted as saying: “They asked if they could put Rangers tartan on the inside of the coffin and the crest on the top. We rejected it because we didn’t think it was appropriate.”

Like an old revived cadaver, the debate about whether or not the team in blue pretending to be “Rangers” is actually a continuation of the loathsome institution from Edmiston Drive or a new Rory Bremner style pastiche of it continues to crawl out from its coffin and the usual sources are cited as evidence of either reincarnation, in the case of believers, or impersonation, in the case of people who have more than a dozen working brain cells.

Allow Earwig to offer the definitive answer courtesy of Jacobs biscuits: as the packaging for Orange Club proudly proclaims (below), this is NEW. End of debate and thank you eveeryone for allowing me to clear that up.

Incidentally, did you know that Jacobs has its origins in a small bakery in Waterford? That’s a cracker, isn’t it? (Any more biscuit puns and you’re fired – Ed)

It later moved to a factory in Bishop Street in Dublin which was one of several prominent buildings occupied during the Easter Rising in 1916 by the rebels – pause while lurking Seconians splutter half digested chocolate biscuits all over their string vests.

With mint Clubs already out of the question thanks to sharing the same dubious colour of wrapping as Pepperami bars, the only variety left of this quintessentially British biscuit available to true blue Sevconians is ‘fruit’. Quite appropriate really as, according to its review on “The Great British Diet” website, “Anyone who grew up with the Clubs of old will notice that the biscuit has changed… The resultant product is a shadow of its mighty former self.”

Ultimately their demise should have come as no surprise as it was widely circulated in Celtic circles many years ago that the Kinning Park giants were going to come to a sticky end. In April 2002 this very magazine revealed that in order to build the training ground in Upper Drumchapel Rangers (RIP) had to have some gypsies who were camped there evicted so that the bulldozers could move in. This didn’t go down well with the travelling people (who weren’t very keen on travelling anywhere at that particular time) and they allegedly got their head man to put a curse on all things Rangers.

Add that to the story below that appeared in the Celtic View ten years before (September 1992) and it is clear that their fate was sealed. Billy Smith from Duntocher met an Indian holy man on a visit to the Taj Mahal and persuaded him to put a curse on Rangers. It seems that one wise fakir from Delhi has doomed lots of silly fakirs from Ibrox. 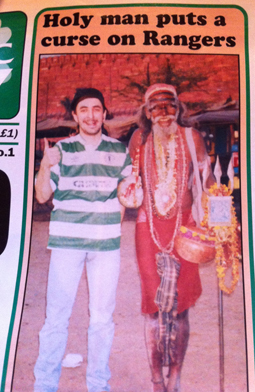 Still, if they die again and want to come back by buying another club and taking over their identity (and buy their history) then may I suggest that there is a suitable Norwegian Division 3 club whose name would epitomise the wind of change blowing through Sevco.