Our NTV staffer has just returned from Spain having spent 6 months working in the Basque country. Here’s his report on the recent Derbi di Euskadi between real Sociadad and Athletic Bilbao.

The ´Derbi de Euskadi´is a footballing rivalry which has obtained an anomalous reputation in world football. There undoubtedly exists a genuine ferocity among the two supports (of this I can vouch for from my daily experience as an Athletic fan living in Gipuzkoa), but it is always underpinned by a mutual solidarity that is embraced and even strengthened each time the two giants of Spanish football cross paths.

This season has been one with as many parallels in footballing fortune as contrasts in footballing philosphy. Both teams have taken some showpiece scalps in front of their fiercely passionate home support – Athletic suckering Barcelona at the death inside ‘La Catedral’ of San Mamés twice in league and cup while Atlético were put to the sword in convincing fashion in Real’s recently reformed Anoeta stadium – but consistency has eluded both teams in their drive for European football, surrendering precious points on their travels to teams nearer the foot of the table, leaving them both chasing the Europa, possibly Champions, League berths.

As mentioned, however, the stylistic contrasts are there for all to see. Real Sociedad have managed to curate, through a number of astute dealings in the transfer market, a squad with depth and dynamism that has been lauded for their creative and expansive brand of football. The loan signing of the perennial wonder-kid Martin Odegaard from Real Madrid as well as some shrewd business in the form of Portu and Alexander Isak, from Granada and Dortmund respectively have represented exceptional scouting within their limited budget.

But if Real have played the modern day footballing transfer market to perfection, Athletic remain beholden to their policy of fielding players born or developed within Euskal Herría (the Basquelands which span across Navarra and also into France). While this is ultimately a restriction that greatly hinders their participation in the aforementioned transfer merry-go-round, it’s ultimately a ride that Athletic fans don’t want a ticket for and given their status as the only team outside of El Clásico never to be relegated, with good reason.

While Euskal Herría hosts 5 teams (Alaves, Éibar and Osasuna comprising the rest) Real and Athletic constitute true behemoths of the Basque game, the zenith coming in the 1980s when the Donostia outfit managed by John Toshack marched to LaLiga glory followed shortly by Clemente’s Athletic.

Since then, the albeit more marginal success has been firmly weighted in Bilbao, with Athletic counting a Super Copa as well as a Europa League final appearance in their contemporary record books. However, the most recent instalment of this fairytale derby came

with a heightened sense of drama, with both teams on the verge of contesting a Copa del Rey final made within the dense forests of Euskadi.

And so the day came and, decked in the red and white stripes of my beloved Athletic, I made the short journey across the postcard-perfect townscape of Donostia to Anoeta stadium.

While waiting on the bus, one Real fan noted upon sneezing that it might have had something to do with his ‘allergy of Bilbaínos’, his confusion made for many laughs at the bus stop when he discovered the Bilbaíno in question had grown up in the suburbs of Glasgow and had a season ticket at Celtic. When he informed me I had inadvertently skipped the queue, I swiftly apologised before adding that we’d soon be jumping them in the league anyway.

That humorous incident, among other similar jibes between the two supports, was indicative of the mood surrounding this fixture, free of the cynical bile that surrounds many fixtures, derby or otherwise, within the British game.
The atmosphere around the stadium was one of celebration, a carnival of Blue, White and Red (admittedly not the most agreeable colours) sharing the same bars along the road to Anoeta. A giant screen was erected just in front of the stadium’s sparkling new plastic facade – a bit of a botched pastiche of the Allianz Arena that has left the exterior looking more like a space age Ikea warehouse than a football stadium – showing the Real Sociedad femenino’s súper copa final against Barcelona. Supporters of both teams were gathered to cheer on what they saw as an important moment for the women’s game in the Basque Country, demonstrating once more that their overall objectives go beyond the whistle at full time.

The atmosphere inside the stadium was no less jovial, with a healthy crowd packed in with 20 minutes to spare before kick-off. Athletic fans were housed in an upper corner of the stadium, resoundingly beaten in the noise department by a rejuvenated Real support, closer than ever to their team thanks to the removal of a much maligned running track. Their recently formed singing section unveiled before the match a striking tifo, at the heart of which was the Ikurriña – the flag of the Basque Country.

In a first half of limited chances Athletic’s man between the sticks, Unai Simon, was by far the busier pulling of a superb save to further amplify his rising stock. His counterpart in the Real net, Alex Remiro, represents an exception to an often held perception of Athletic poaching the youth academy of the Donostia side, having been signed in the summer from Athletic. He however was to have little to do all afternoon.

Half time came and the obdurent and unremarkable Athletic were frustrating the creative forces of Sociedad. It has been a tactic adopted for the most recent period of the season by Athletic’s coach Gaizka Garitano, most likely to offset the stretched resources of his squad. His game plan was thrown out when Real finally capitalised on defensive frailties and Portu poked home from close range.

Soon after however the two bright sparks of Athletic’s technically limited attack line had pulled the game back, Iker Muniaín picking out a space to thread a ball for the imperceptibly quick Iñaki Williams to chase (often an academical contest) and he managed to squeeze the ball under Remiro. A real touch of class in an otherwise flat display.

The raptures of the pocket of red and white wouldn’t last long as Isak soon found himself in the Athletic area and, following a reaction save from the elastic limbs of Simon, fired what would be the clincher with around ten minutes to go. The ensuing rabble in the stands left me in no doubt as to how much this victory meant to the Sociedad faithful, avenging the defeat suffered in San Mamés in September.

But during the lull which enveloped the stadium as the tinderbox fixture petered away at a cumbersome pace (save a red card for Muniain after a reckless challenge) there was a defiant din coming from the Red and White corner of the stadium which gradually erupted into a unified chorus around the stadium. After asking a nearby supporter (of Real I should add, having been able to sit in the home section without a second glance) he told me they were singing a Basque folk song called “Txoriak Txori” followed by “Ikusi Mendizaleak” – two staples in the basque repertoire that talk about their affinity for the striking mountainscapes that surround them.

It was a truly hair-raising moment that separates this fixture from any other I’ve ever attended. While most of what I’ve described is standard derby fodder – two neighbouring cities charging head on in a blood and thunder football match – there is an important message that both support bases pride above all else: when the final whistle blows, we’ll be pulling for the same team, supporting the same cause.

Real have been put back in the running in an extremely tight European race, and given the plaudits lavished upon their exciting young squad, they’re delivering on the hype.

Athletic on the other hand can count themselves lucky that their early season form leaves them safely away from the relegation fight. Although if asked what matters more in the grand scheme of things, the only response will be that Athletic remains Athletic. 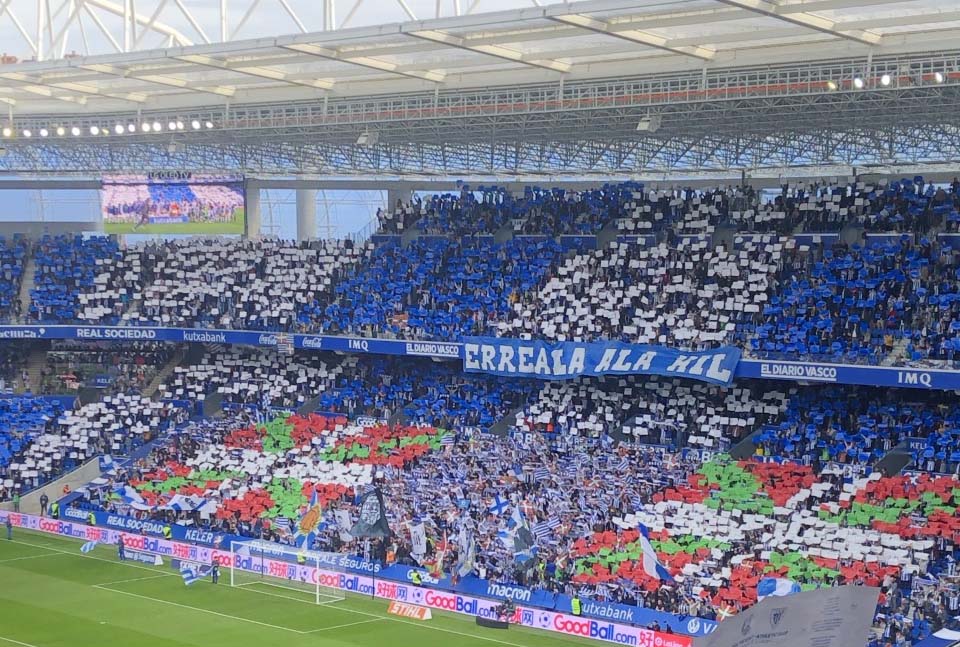