This is boxer Ken Clean Air System (above), subject of a spoof Monty Python documentary, seen here trying to figure out how to jog around a parked car during one of his training sessions. Ultimately it’s too difficult a problem for Ken to solve and he turns round and jogs back the way he came.

Ken has become shorthand round NTV Mansions these days for supporters of the basket of assets that Charlie Green bought from the administrators of the now defunct Rangers FC. Move over Broxi Bear – Ken Clean Air System is the new mascot in town.

Not content with venting their collective spleen at empty stadiums or sending fighting fund donations to clowns, the Sevvies are not slow to display their open mindlessness for all to see on social media.

It’s little wonder that they can barely manage to comprehend what’s happening financially at the Death Star. When single digit numbers are causing problems, being able to get to grips with a financial spreadsheet seems a long way off. Take ‘Thornhill Bomber’ for instance:

Or ‘Bellshill Bear’, who ambitiously tried a higher number: 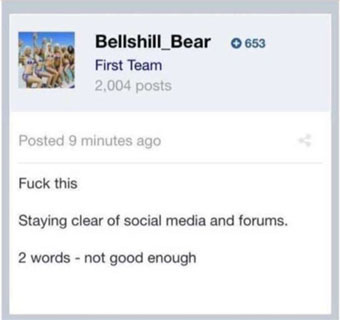 And it’s not just your humble correspondent who has noticed that when it comes to number crunching, many Sevconians have misplaced their dentures, as this exchange between ‘Broxi Bears Gran’ and Frankie Boyle would suggest:

“I used to wake Ken up with a crowbar on the back of the head. but recently I found that this was too far from his brain and I wasn’t getting through to him any more. So I now wake him up with a steel peg driven into his skull with a mallet.”
Ken’s manager.

Numeracy is a challenge, obviously, but so too literacy. Thank goodness the Sevconians have one another’s backs when it comes to spelling and grammar:

It’s true that typing anything in the wake of a horrendous defeat to a team that you loathe can be emotional. Feelings run high, and all that pent up hatred that has to be bottled up when trying to function as a part of civilisation might bubble over, but if you’re not careful then the object of your ire can be obscured:

Does WATCCCOE intend to insult the Pontif in Rome or is he a plumber? Is there some piece of his favourite stadium hanging askew and causing an obstruction to his view? Has his Sherlock Holmes-style Meerschaum sprung a leak?

I hope the answer is simply that he has given up on crack cocaine but I fear for his mental wellbeing nonetheless.

So too with ‘The Hammer_WATP’, who worked himself into such a sectarian frenzy during his pre-match 2 Minute Hate before the 4:0 humiliation (or was it the 5:0 humiliation, it’s hard to keep track these days) that it caused him to conflate rosary beads with potatoes in his febrile mind: 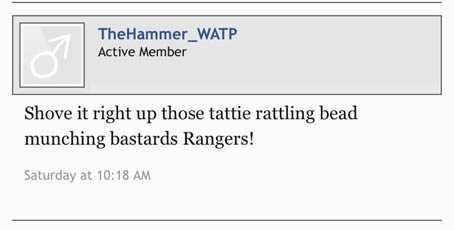 VOICEOVER: For breakfast every day, Ken places a plate of liver and bacon under his chair and locks himself in the cupboard.

MANAGER: Well, he’s having a lot of difficulties with his breakfasts, but this temperament, caused by a small particle of brain in his skull, and once we’ve removed that he’ll be perfectly alright.

At least there was time after the 4:0 drubbing for some sober reflection among the Sevconians. Alas, that didn’t include checking the old spelling. Here’s Bob Malcolm FTP’s verdict on the events surrounding the semi-final: 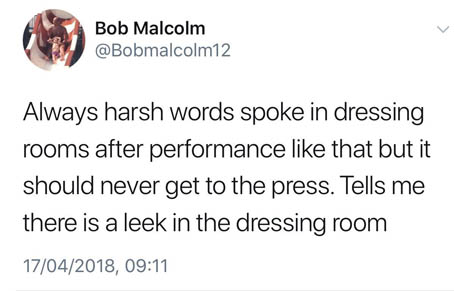 In case you’re wondering, yes, it’s the same Bob Malcolm who used to masquerade as a football player in front of the same stadium that John Brown played for. Bob now sells ice cream from a mobile vending point – echoes of the KLF’s hit, “He’s just a fool, and he’s ancient and he drives an ice cream van…”

VOICEOVER: Every morning at his little three room semi near Reading, Ken gets up at three o’clock and goes back to bed again because it’s far too early.
It’s not all doom and gloom for the Kens out there, however, as it has been announced that the manager of the Liverpool Under 18s is about to take the helm in order to steer the SS Sevconia away from choppy waters.

The news prompted BigHuggyBear to throw away the dictionary and share his joy with the cybersphere:

Just that one off, which in Thornliebomber’s world is probably two off – while BellshillBear makes that three off. Jeez, how confusing it must be to be a bear these days!

And yet how reassuring that there are real life wordsmiths who are ready and willing to make your pain go away. Take Matthew Leslie of the Daily Record, for instance, who rationalised the appointment of the Liverpool Under 18s boss thus:

Given that he was contacted about the job eight days previously, it would have been interesting to see what NASA would have done with their moon project with a week and a bit’s notice.

Yet, despite their lack of cerebral activity, there is a sensitive side to the Sevco support, a side which writes poetry. I leave you this month with this classic  from a poster on one of their websites:

“There’s something about both your eyes that are blue”… “You are like a grandson from the World war that Rangers won, we will get the battle fever on and build those ships to sail you to the Somme.” Siegrfried Sassoon eat your liver out.

VOICEOVER: At 10.30 every morning Ken arrives at what he thinks is the gym. Sometimes it’s a sweetshop, sometimes it’s a private house. Today it’s a hospital.

Toodloo The Noo
The Earwig