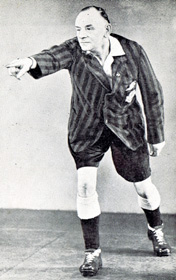 April 1989 and the world is about to be introduced to a size 5 leather Mitre football that defies all known laws of physics and movement. Isaac Newton, had he been alive, would have been eating his words.

Celtic were playing Rangers (RIP) in the final league derby match of the season and had to win to have even the faintest hopes of retaining the league title they won in a blaze of glory 12 months previously during the Centenary season. But the joy of that seemed a long way off then.

The summer of 1988 had been a disaster of our own making. In key areas of the team we required fresh blood. Tommy Burns and Billy Stark had been outstanding but both were over 30. Roy Aitken was a similar age and behind the scenes there was trouble brewing as star striker Frank McAvennie was agitating for a move back to London. You will be unsurprised to hear that his model girlfriend was a major motivation in this request.

Even without these issues the fact was that our squad was very small as we were about to find out.

During that summer we bought two players, both goalkeepers. One was an Englishman called Ian Andrews who had arrived from Leicester. He was young but had some promise in that he had won a couple of U21 caps for his country. The other was Alan Rough, former Thistle, Hibs and Scotland legend. He wasn’t young but had a cupboard full of Scotland caps and the experience of three World Cup finals behind him. The reason for both these buys was that we had no fit ‘keeper. Reserve goalie Alan McKnight had moved to West Ham to get first team football and Pat Bonner had knackered his back at the end of the season forcing him out of the cup final, but had, somehow, still been allowed to go to the European Championships with Ireland, where had been a star. However that tournament hadn’t done his back or Celtic any favours. He would be out for a couple of months and his absence contributed massively to our horrific start to the league campaign.

Of our first 8 league games we won 3 and lost 5, shipping 15 goals in the process, 5 of them at Ibrox on a day that was almost entirely blamed on Andrews. But the awkward truth was that our central defence of Aitken and McCarthy were far more culpable in the overall calamity.

Other stand out disaster performances came at Easter Road with a 3-1 loss and a home spanking from Aberdeen, again 3-1. Andrews this time was very much to blame and, like the crosses into his penalty area, was dropped shortly after never to be seen again (in truth his career never recovered from Ibrox).

Meanwhile over the river Rangers (RIP) hadn’t been sitting on their hands during the summer the way Celtic had. They had gone out and bought England right back Gary Stevens from Everton and striker Kevin Drinkell from Norwich City. After the season started they would also sign Andy Gray for a short while and would continue to add to their squad as the weeks went by. During the calendar year of 1988 they would add six players who went straight into their first team and a couple more squad players. We added no one and we had the smaller squad to start with. What did we want to happen?

In November we got some measure of revenge over Rangers (RIP) with a 3-1 win at Celtic Park, but in January our squad size was again a factor as we went to Ibrox without the injured Paul McStay and again came away with a hammering; 4-1 this time (as if it wasn’t bad enough we had taken the lead in both games at Ibrox).

Oh, and to add insult to injury, we lost McAvennie with a broken arm after 20 minutes, so that should probably read injury to insult, but you know what I mean. Just in case you are wondering, the challenge that broke his arm wasn’t deemed a foul, but you probably guessed that already.

In January Big Billy finally brought in a new player. We had played and struggled badly against Dumbarton in the 3rd round of the Scottish Cup and on the back of that we bought their centre half Steve McCahill.

He may have been a huge Celtic fan, he may be a nice guy, but there was no way he should have been anywhere near the first team squad at Celtic and that was about to be proved beyond a shadow of a doubt.
And so to the big match. Rangers (RIP) were well up for this one. They hadn’t won at Celtic Park for 10 years, but they had an almost unstoppable momentum and victory here to all intents would wrap up the league. They also had an almost full squad to choose from, the only notable absence being Ian Durrant who suffered a horrific knee injury the previous October that severely curtailed his career (say what you like about him, he could play and he was never the same player when he came back).

Meanwhile we had lost Derek Whyte to injury meaning that Steve McCahill would start. We had also finally lost McAvennie. After he returned from injury his demands for a transfer became public and he was sold in March. Despite his desire to leave his performances that season were often summed up with the phrase “1 man army”. His departure was a huge loss. Celtic lined up;

Rangers (deceased) were in about us from the start, the tone set when McCoist beat Aitken in an early tackle. The Hoops were second to everything and we were a goal down within 4 minutes.Walters turned Rogan inside-out at the goal line and was hauled down. From the resulting free kick Drinkell easily lost his marker and headed the ball goalwards. McCahill got in the way and deflected the ball past Bonner. Roy Aitken went absolutely spare.

They were running us ragged. After 31 minutes they were awarded another free kick 25 yards out. Ferguson hit it hard, Bonner could only parry the ball straight into the air and watch as it dropped into the net.

Two down and almost unable to get out of our own half, the manager reacted. He withdrew Stark and put on Joe Miller. It had an almost instant effect. Celtic began to hold the ball and make headway into their half. By the half-time whistle we had taken a hold of the game and early in the second half we scored.

Miller gathered the ball in his own half and made his way down the right. He gave it to McStay, who played in the overlapping Morris whose cross was gathered by Walker and beautifully finished in off the post.

We had almost completely turned the tables on them, we were the ones on the front foot and finally the pressure told. Another cross from Chris Morris was intercepted by Gough, but he mistimed it and the ball skidded off his boot towards Mark McGhee. On the way it hit Gough’s hand and fell dead. Penalty!

After a discussion Joe Miller stepped up and hit the weakest penalty you’ll ever see. It was easily saved.

Disaster, but still we kept at them until there came the moment that defined the game.

Again Morris was played in, this time about level with the 6 yard line (his previous crosses had been level with the 18). He appeared to overhit it. Mark McGhee was close to their keeper Woods, but careful not to give away a foul. Woods was struggling as the ball came closer. He missed it and the ball hit the inside netting at the back post.

Delirium and chaos on the terraces, redemption from two down and a missed penalty.

At high pressure matches like this I’m always nervous about the referee. I always check that he has pointed to the centre spot before celebrating the goal and there he was pointing and running away. Time to smile!

But suddenly he stopped. The linesman had raised his flag. The Celtic players surrounded the ref as he walked over for the dreaded “consultation”. He then signalled that the ball had gone out of play!

So let’s get the story straight; Chris Morris hit a cross that went out of play, back in and then back out again (because it crossed the goal line and hit the net) all while going up and down at the same time?

Not since the magic bullet theory postulated by the Warren Commission has there been a more ridiculous assertion. After the ball left Morris’s boot it remained untouched until it hit the net. Woods never got near it, neither did McGhee. For this theory to have credibility there would needed to be a hurricane force wind blowing instantly east and west at the same time. There wasn’t. There also wasn’t any great fuss made in the match reports by the press. It was simply accepted that the ball must have swung out of play, then back in… er, then back out again. Nothing odd in that.

As the man once said “You canny change the laws of physics”; obviously the second part of that phrase must have been, “unless you need to preserve a lead for Rangers (RIP) and then you can make up anything you want!” But given that Star Trek is set in the 23rd Century and Rangers (RIP) died in the early part of the 21st I suppose we can understand why the second bit lost its relevance and popularity.

Anyway, with that Celtic finally ran out of gas. Heartened by a penalty save and a sympathetic linesman Rangers (RIP) held out. The league duly followed but Big Billy had one last hurrah as we fought out a hard won 1-0 win in the cup final, Joe Miller making up for his penalty miss with the only goal and that goal was far more valuable.

In truth the league was long over before that penalty miss. Funnily enough, that cup final is the source of one of their main refereeing gripes – their cornerstone evidence that Celtic were always the favoured team – when Roy Aitken stole a throw in. Yes, you read that correctly; we once got a throw-in that we shouldn’t. It was in our half as well, but from that we went into their half. They had possession but it was a poor clearing header and from that we scored the only goal. So ignore all the disallowed goals, denied penalties, broken bones that aren’t fouls and curious red cards. Thrown ins are the crucial point apparently. (If we were cataloguing all the throw ins we should have got against them that went the other way we would be here until the 23rd century._

That was the first of their nine in a row league wins, but you can look back and smile at that now because every one of them was simply another down payment on their demise as their ambitions rapidly overtook reality and the money started to run out.

The impact of this game on Celtic was that there was almost a mass brawl in the dressing room over who should have taken the penalty. Many thought that Aitken should have taken the captain’s responsibility and this game all but signalled the end of Steve McCahill’s first team career at Celtic. He became that most unwanted thing; the successful reserve captain. Ashtray on a motor bike.

The next year would see us humiliated with the Merde signing for us then them, the signing of inadequate players and the removal of legends either past their prime (Burns) or hounded out (Aitken). The dark years beckoned.