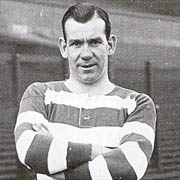 Pele, Puskas, McGrory, Muller. For the majority of readers, and certainly those outside Scotland, one name in this quartet might be considered a little less illustrious than the others. As it is, and while Jimmy McGrory is undoubtedly the least-known of these goalscoring greats, the Celtic legend nonetheless stands proudly alongside Pele et al in the list of football’s ten most prolific marksmen.

A staggering tally of 550 goals from just 547 competitive appearances ensures his place amid such legendary company and, when it comes to league goals, only six players in the history of the game have managed more. Muller isn’t among them, nor indeed are any of his fellow countrymen, with McGrory’s colossal haul still a record in the United Kingdom, 171 higher than that of England’s all-time leading scorer, the Everton great Dixie Dean.

It’s a benchmark that will now surely stand forever, as indeed will two other McGrory milestones: 63 goals in one season (1927/28) and eight in a single game, Celtic’s 9-1 win over Dunfermline Athletic in January 1928. The ball with which he achieved the latter feat is now on display at the Scottish Football Museum at Hampden Park, while the great man himself has a well-deserved place in the Scottish Football Association’s Hall of Fame.

Snubbing Arsenal, snubbed by Scotland
Though he measured in at just 5ft 6ins, no more than average for the time, this supreme predator’s great strength was his unrivalled ability in the air. Broad-shouldered and brave, McGrory – who passed away on October 20th 1982 – was also blessed with an extraordinary leap, earning him the nickname ‘The Mermaid’. Indeed, headers accounted for almost a third of his goals, with journalist Hughie Taylor writing of the “tingling feeling” of watching the striker “hover hawk-like, then twist that powerful neck, and flick the ball as fiercely as most players could kick it.”

Team-mate Johnny Paton also had vivid memories of these impressive physical attributes. “Jimmy was all strength and muscle, and he had a great bull neck,” said the former Celtic and Chelsea forward. “If he had been a boxer, you couldn’t have knocked him out. He was the hardest header of a ball I ever saw – along with Tommy Lawton at Chelsea – and had a great shot in his right boot.”

Yet, for all these attributes, McGrory started out his career playing at inside-right and inside-left before Celtic, in this third season with the club, finally decided to experiment with him as their central spearhead. The results were the stuff of legend, with McGrory’s final tally over double those of his closest rivals in the club’s all-time scoring list, Bobby Lennox and Henrik Larsson.

“My mind was set on scoring goals,” the great man himself told The Observer in 1971. “I got into positions from which I could head or shoot. When the ball did come, I did not have to waste any time. I hit it. I see players trying to control and manoeuvre the ball when it comes to them, then looking up to see what they are going to do with it. They waste so much time.”

Despite their talisman’s Herculean efforts, Celtic somehow contrived to remain in Rangers’ shadow throughout the 1920s and ‘30s, winning the league just twice during McGrory’s goal-laden 15-year career. In hindsight, perhaps this lack of success can be attributed to the same dearth of ambition that led to the Bhoys attempting to offload their prize asset to Arsenal when he was at the peak of his powers.

So devoted was McGrory to Celtic that the club’s board even went to the extreme of luring him under false pretences to London, where a meeting had been arranged with the Gunners’ renowned manager, Herbert Chapman. However, despite the prospect of becoming Britain’s highest-paid player, and his own unhappiness at the conduct of the Celtic board, McGrory snubbed Arsenal to continue a love affair that would endure for many years and decades to come. “McGrory of Arsenal just never sounded as good as McGrory of Celtic,” he would later remark.

His mother and father had been poor Irish immigrants, specifically the kind of people Celtic had been founded to help, and his love for, and loyalty to, the club – his club – remained absolute. Many believe that it cost him greater recognition at international level, with a paltry haul of seven caps attributed to perceived anti-Celtic sentiments among the Scotland selectors of that era. Nonetheless, on the few occasions he did pull on the dark blue jersey, McGrory succeeded in replicating his club form, famously scoring twice in a 2-1 win over England in front of over 134,000 fans at Hampden.

Moving into management
That was in 1933, and within four years he had moved into the dugout, learning his trade at Kilmarnock before inevitably returning to Celtic in 1945 to begin a 20-year reign. However, McGrory the manager was very different to McGrory the player, with his dynamic, forceful style on the park belying an affable and gentlemanly demeanour off it.

As Billy McNeill, the club’s European Cup-winning skipper, recalled: “He was always Mr. McGrory to me – and to all the other players. A lovely man with a pipe. Always smartly dressed in a collar and tie, it was hard to tell he was such a dynamo of a player in his day. But then a player changes as soon as he runs on to the park. He didn’t just love Celtic – he was Celtic.”

With team selection controlled by the club’s then chairman, he struggled to revive Celtic’s fortunes and contemplated resigning within three years of taking charge as the team narrowly avoided relegation. There were triumphs though, most notably victory in the 1953 Coronation Cup – a competition contested by four English and four Scottish sides – and in a famous 7-1 trouncing of Rangers in the 1957 League Cup final.

In 1964, McGrory also led an audacious, if ultimately unsuccessful, bid to bring Alfredo Di Stefano to Celtic Park, and he went on to work as the club’s public relations officer until his retirement. When he died, in 1982, it prompted an outpouring of genuine sadness as Scotland mourned one of football’s true gentlemen, and the beautiful game lost one of its greatest-ever strikers.