We hear that there’s something of a dispute going on with regard to the selling of blue strips in Glasgow this season. Is it not an ideal opportunity to at least consider this as an alternative to the Puma gear? 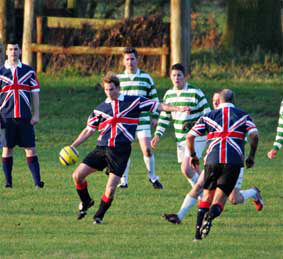 Some years ago NTV’s Royal correspondent Jenny ‘Flute’ Bond snapped this pic while on a trip to the wee but an’ ben the Windors keep at Sandringham.

That particular Boxing Day the Family played a friendly football match against the Sandringham Estate workers. Harry, Wills and Peter Philips all featured in the Windsor’s line-up (‘We get first pick and shoot down the hill’ etc) who took to the field sporting the natty strips shown here.

Asked if he’d ever consider wearing the strip in public Harry said that he’d rather be caught by the press dressed as a Nazi Obersturmbahnfuhrer, complete with swastika armband.

The workers, by contrast, chose as their strip the green and white hoops.

Despite the fact that any Sevconians leering over this picture might be drooling (even more than usual) at the thought that William might actually be one of ‘Ra Peepul’, he is, in fact, an Aston Villa supporter. We even hear that on one memorable visit to Villa Park he let slip that apart from the Clarrie Blues his favourite team is Celtic.

All of which leaves us looking forward to the day when Wills has finally inherited his granny’s tiara and rolls up at CP to start a rousing chorus of ‘There’s only one King Billy and that’s me!’

For the record, the final score in the match was Royals 4 Workers 1. According to Jenny ‘Flute’ Bond, ‘If you think the refs are bad when the Hoops were playing the Sons of William, you should have seen them when William’s actually in the team… along with his brothers and cousins!’