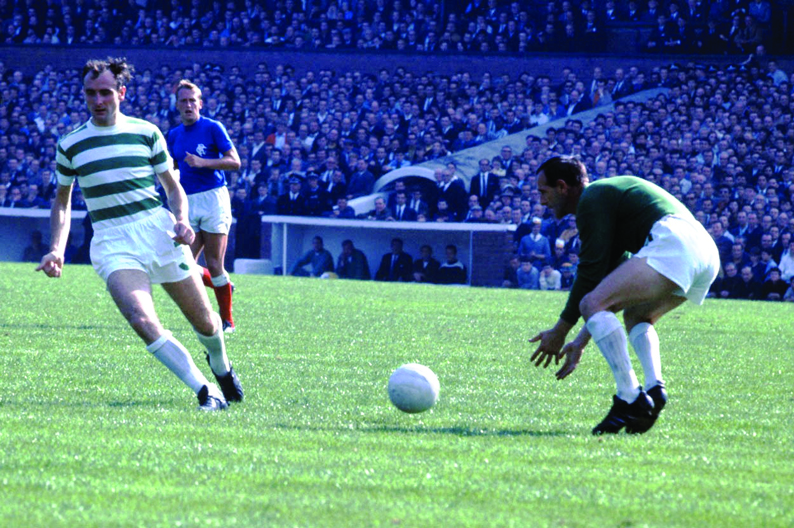 Among the many achievements of Lisbon Lion Ronnie Simpson was representing Great Britain at the 1948 Olympic Games in London. The Evening Standard invited Ronnie down to Highbury in 2003 to recall the part he played in that tournament as a callow 17 year-old.

Ronnie Simpson’s football career was as astonishing as it was long-lasting. For starters, he became the youngest player ever to turn out in the Scottish League. That day in 1945, he played in goal for his Glasgow school team in the morning before turning out in front of 25,000 at Hampden Park for Queen’s Park against Clyde in the afternoon. Wayne Rooney, eat your heart out.

Ronnie was just 14. A quarter of a century later Simpson was still going strong, having at 37 set another record by becoming the oldest player ever to be voted Scotland’s Footballer of the Year and, at 36, the most venerable ever to make a debut for his country.

He marked the occasion at Wembley by helping England’s auld enemy deliver the first defeat for Aif Ramsey’s fabled newly-crowned world champions (1966). In between he just got on quietly assembling his own legend with a decade’s sterling service for Newcastle and then, just when he’d gone part-time with Hibs in his thirties and was about to retire he got an SOS from Celtic where he was guaranteed immortality as the on-field patriarch of Jock Stein’s peerless Lisbon Lions who brought the European Cup to Britain for the first time in 1967.

So it was a little difficult to tell Scotland’s greatest goalie, at 72, why Standard Sport wanted to invite him to fly down to London from Edinburgh for the day.

What, to talk about his two FA Cup Final triumphs for Newcastle or the nine trophies he helped win in his six twilight seasons at Parkhead?

Er, no, it was to remind him of the Olympic medal he never quite managed.

“Aye, it’s a good job you’re not taking me to Wembley then,” he agreed ruefully, recalling how in the bronze medal play-off of the 1948 Games there, he had an absolute shocker for the Great Britain side in the 5-3 defeat by Denmark. “You know, it was probably one of the worst games of my career.” I reminded him of the testimony of team-mate Jack Rawlings who had noted how “poor Ronnie let in four under his body that he would normally have stopped and sat in the dressing-room afterwards just crying his eyes out.”

Simpson couldn’t remember the tears; what lived with him was the exhilaration of feeling like an Olympian. Particularly now he was back at Highbury. For this is where the adventure had begun rather more happily. 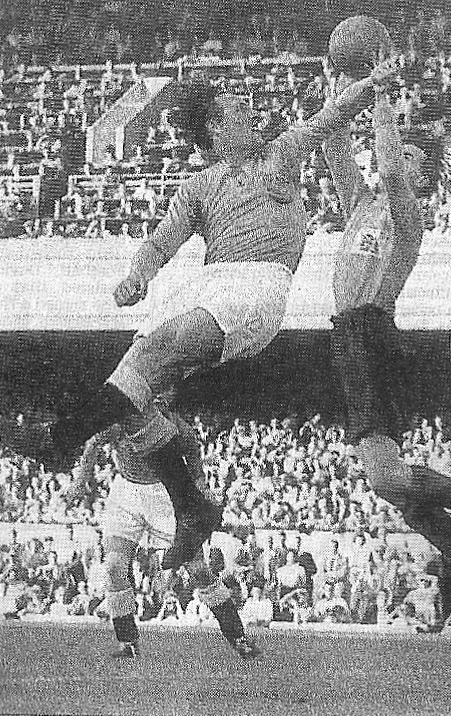 A young Simpson (right) guarding the GB goal against Holland in the August evening sun in 1948 with the Dutch forward seemingly an early exponent of the Hand of God.

He was only 17, working as a trainee sub-editor for a Glasgow newspaper during the week and playing for Queen’s Park, the Hampden-based amateurs, in the First Division on a Saturday. In Scotland, they knew him best as the son of Jimmy Simpson, the former Rangers and Scotland captain.

In England he was a no-one. Yet suddenly he was transported into the spotlight. For a fortnight the nation’s gaze was only on this unknown amateur crew of young Scottish journeymen, including half-a-dozen of Ronnie’s mates at Queen’s Park and a few English luminaries like the captain and Bishop Auckland legend, three-time Olympian Bob Hardisty.

Down in London, Ronnie found himself having dinner with Winston Churchill, watching Emil Zatopek running to glory, getting on a plane for the first time ever to go to a practice match in Switzerland. This was the time of his young life. “We were given no chance against nations like [the eventual winners] Sweden who had no pro league and could simply choose their best players. You’re talking about some of the best in the world,” recalls Simpson.

Ah, but the British Olympic Association weren’t going to be shown-up at their own game at their own Olympics – so they appointed as manager a young man they felt was going places.

“It was a six-week education I’ll never forget. Matt had just won the English Cup with Manchester United and there wasn’t one of us he didn’t make a better player. Just as Jock Stein was, you just knew he was special. We’d play on a Saturday and go to Old Trafford to train with him on a Sunday. I think he saw this as a big stage for himself and was taking it very seriously.”

The first match was against Holland at Highbury. “1 was used to Hampden but this was different. What a thrill. The place seemed jam-packed but when you are a young boy, you don’t feel the pressure. And I had a good game that evening.”

Great Britain won 4-3 after extra time and when they went to Craven Cottage in the next round and beat France 1-0, it was evident Busby had worked miracles. “Perhaps there became a bit too much expectation,” Ronnie remembers.

The fun and games finished when they went to Wembley and lost 3 -1 in the semis to Yugoslavia. “Busby had become close to us all and the last thing he told me was that if I ever thought of turning pro, I should ring him.”

Ronnie wondered what would have happened if he’d ever made that call. Tom Curry, Busby’s assistant at Manchester United who had helped to train the ‘48 Olympians was one of the 23 who died a decade later in the Munich air disaster.

Instead, Simpson went his own way after National Service, giving up his job as a sub-editor for the ‘outdoor life’ which ended-up taking him all the way to Buenos Aires where, even before Celtic’s infamous 1967 World Club Cup Final against Racing Club had begun he was k.o.’ d in his goalmouth by a missile from the crowd.
At Highbury, one of Arsenal’s backroom staff, a Celtic fan, pops in to pay homage. They still revere Ronnie as ‘Faither’ of the 1967 legends, the wee goalkeeper with the coolness to outrageously backheel his way out of trouble, miles out of his box against an onrushing Inter Milan striker while his young team-mates swept irresistibly to victory. A cottage industry still surrounds the triumph. Ronnie, who ran a pub and a sports shop for a while, was a meeter and greeter at Celtic Park and, with the rest of the Lions, even had an annual freebie to Las Vegas to meet US-based Bhoys fans.

“You know, it would have been nice to say I won an Olympic medal,” he says, but those who see the world in green and white are just thankful that despite the tears his London experience persuaded a raw 17-year old that football was going to be more fun than the newspapers.

(Adapted from an article by ian Chadband in the London Evening Standard January 15 2003 and which appeared in the Celt in January 2005.) 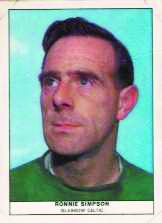 Ronnie died 20 April 2004. His entry in the Alphabet of the Celts reads as follows:

Celtic asked Queens Park for the loan of boy goalie Ronnie Simpson, son of Jimmy of Rangers, when Willie Miller was on international duty at Wrexham (October 19th 1946). Ronnie had made his debut for the Spiders at the age of 14 years 304 days.

When he won his first Scottish cap he was 36 years 196 days old and no stranger to Wembley: he had been there in the 148 Olympics and won cup medals with Newcastle in 1952 and 1955.

He had also played for the Magpies against Celtic at Celtic Park in the Cup-winners match, September 12th 1951.

Sean Fallon secured him for Celtic from Jock stein at Hibs for half the asking price of £4,000 and he became Celtic’s regular goalie as of September 25th 1965 when Celtic beat Aberdeen 7-1 in the League.

Ronnie’s shoulder went out for the first time at Shawfield on february 12th 1969. He was sidelined until October 4th but the arm dislocated again nine days later and he said goodbye to the first class game after almost 25 years. He took to the field with the other Lisbon Lions to salute the fans before the Clyde game of May 1st 1971.

The players didn’t just call him ‘Faither’ because of his age. He stamped his authority on the team of Celtic’s golden era. how would Jock Stein have done without him?

He ranks with Celtic’s best between the sticks: McArthur. Adams, Shaw, Thomson, Kennaway and Miller. Ronnie Simpson seldom made a mistake. He is an all-time Celtic great.

For Celtic Ronnie made a total of 188 appearances in all competitions, 91 of which were shut-outs (48%)