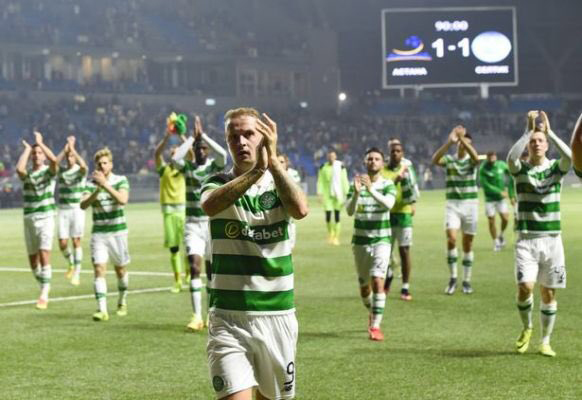 It was looking like a very familiar tale as this one drew to a close but Celtic dug deep and now have a very strong position in the tie.

It was always going to be a massive step up in class and the Kazakh side hadn’t lost a home European tie since being humbled by Villareal three seasons ago. They don’t score many but always find a way to get a crucial away goal which is why, in my opinion, the away goal in our favour was a must.

Sviatchenko’s injury meant that Efe Ambrose kept his place in the centre of a back three comprising of himself, the inexperienced O’Connell and Mikael Lustig.

They didn’t have much to contend with in the opening fifteen minutes and Celtic transitioned well into attack. The frustrating thing was that we couldn’t muster a shot on target, Griffiths’ daisy-cutter being the closest we came.

Astana soon began creating through their dynamic wingers Twumasi and Bysebekov, and the Kazakh tradition of flinging the ball into the box from throw-ins against Celtic gave the defence something to think about.

But Celtic looked reasonably comfortable in the first half until Gordon flapped at a corner and let Logvinenko nod Astana into the lead on 19 minutes. Poor goalkeeping but Gordon went on to redeem himself with a couple of vital saves. One instinctive stop in particular from a Kabananga volley that was creeping in at the near post went a bit unnoticed at the time.

In truth, we didn’t create enough in the first half and they looked better organised. Roberts had the beating of his man every time but whenever he wasn’t scythed down by the thuggish Shomko, he was too isolated.

Not a bad first half and we were well in the tie.

The opening of the second-half saw us totally switch off. For all Ambrose did some of the bog-standard defensive work quite well he could have easily cost us with some of his brain-farts.

We were on the ropes and a speculative Kabananga effort kept Gordon on his toes, but he didn’t have much chance with the thunderbolt that hit the bar.

However, Celtic got to grips once again with the surface and after Dembélé was replaced by Rogić we looked dangerous going forward.

Barely a minute later we were level through Griffiths. Top marks to Roberts who brilliantly kept the ball alive before wisely playing it to his team-mate to smash home. Well deserved.

While we might have gone for the jugular and tried to put the tie well in our hands, I don’t think anyone will complain about the draw. Superb result.

Gordon 6 – Poor from the corner that resulted in Astana’s goal offset by two particularly good saves to keep us in the tie.

Lustig 6 – Positionally inconsistent tonight but his experience showed and he looked solid.

Ambrose 5 – Some will say that I’m being unfair to him but just because we only conceded one goal and he had little to do with that one goal that doesn’t mean he had a good game. Some poor decisions and a couple of stray passes as well as giving opponents enough room in the box to build a row of tenements. The trade-off is a player who makes some decent tackles and has a slight bit of pace? Not worth the risk and looked the weakest of the three outright defenders tonight.

O’Connell 8 – Composed and concentrated all game. Knew when to play the pass and when to play hoof ball. Superb performance.

Tierney 6 – Decent game. Doesn’t look terribly effective going forward but defends so well and runs the channels tirelessly, although one or two times Twumasi had him beat.

Roberts 7 – Too much for his marker all night and made a real difference. Didn’t always come off for him and part of that is down to his decision making but a good performance nonetheless.

Brown 6 – Didn’t contribute much going forward but kept his passes simple and won the ball back when required.

McGregor 5 – Not one for the highlight reel. Just didn’t come off for him at all. Capable of better.

Armstrong 6 – Very good game and had a number of good give and goes with Tierney and Roberts. Linked the play well at times.

Dembélé 4 – Had a bright start and a penalty claim but as the game wore on he couldn’t hold the ball up. I don’t think fitness is the problem as he played 40-50 games last season and was here for the start of pre-season. Needs a run of league games to get him up and running.

Griffiths 7 – The only man who you would have realistically said was going to score. Even when he was isolated or just frustrated he kept ploughing on and got his reward with a superb finish.

Bitton – First contribution was a wayward pass but the Israeli was actually the very man to replace McGregor and brought some much needed composure to the centre of the midfield.

Forrest – A couple of aimless, ‘dark alley’ runs. Not much else.

Rogić – Looked far more confident than Dembélé and was much more effective on the ball.