Said Lizzie to Philip as they sat down to dine,
“I’ve just had a note from an old friend of mine,
“His name is big Geordie, he’s loyal and true,
“And his nose is my favourite colour of blue.

“He says that the Rangers are right on their game,
“And asks for a trophy to add to their fame
“I’ll send up a trophy the Rangers can win”.
Said Philip to Lizzie, “Watch the Celts don’t step in.”

Said Lizzie to Philip, “They don’t stand a chance,
“I’ll send up my Gunners to lead them a dance,
“With the Celtic defeated the way will be clear,
“For a cup for the Rangers in my crowning year.”

But oh what a blow to the old boys in blue,
The Celts beat the Arsenal and Manchester too,
Beat the Hibs in the final and lo and behold,
All Hampden was covered in green, white and gold.

Said Lizzie to Philip when she heard the news,
“A blow has been struck to my loyal True Blues,
“Oh tell me dear Philip, for I ought to know,
“How to beat Glasgow Celtic and keep them below.”

Said Philip to Lizzie, “There’s only one way,
“And that’s been no secret for many a day,
“To beat Glasgow Celtic you’ll have to deport,
“The whole Fenian army that gives them support!” 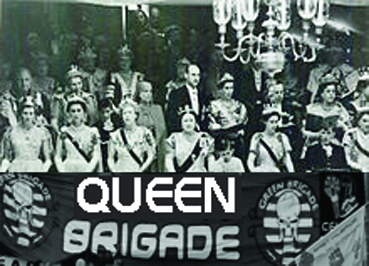