Think about what passes for the press we have in this country then imagine for a moment a parallel universe where the papers were unstintingly and persistently biased in favour of Celtic. Difficult as it is to believe, in fact such a paper once existed. The Glasgow Observer was founded in 1885 and targeted as its audience the community from which Celtic drew the majority of its support.

This weekly publication covered football almost totally from a Celtic perspective. In fact its journalists were mere propagandists for the club and none more so than ‘Man in the Know’. Tom Campbell describes how, “Over the years a number of different ‘journalists’ took over this pseudonym but each and every one was a Celtic zealot, almost laughably biased in favour of the club and tilting at the traditional enemies: Rangers, the SFA and referees.

“The pseudonym was a cunning one, suggesting that the writer was privy to insider knowledge, and there is no doubt that the club did use his columns to get across its point of view unofficially but effectively.

“Consider the calibre of the writing, the depth of feeling – and the content:

On the terracing at the Dalmarnock end on Saturday there was congregated a gang, thousands strong, including the dregs and scourings of filthy slumdom, unwashed yahoos, jailbirds, night hawks, won’t works, ‘buroo’ barnacles and pavement pirates, all, or nearly all, in the scarecrow stage of verminous trampdom. This ragged army of insanitary pests was lavishly provided with orange and blue remnants, and these were flaunted in challenge as the football tide flowed this way and that. Practically without cessation for ninety minutes or more, the vagabond rabble kept up a strident howl of the ‘Boyne Water’ chrorus. Nothing so designedly provoking, so maliciously insulting, or so bestially ignorant has ever been witnessed even in the wildest exhibitions of Glasgow Orange bigotry…

… Blatantly filthy language of the lowest criminal type assailed the shocked ears of decent onlookers. There was no getting away from it, chanted as it was by thousands of voices in bedlamite yells. The stentorian use of filthy language is a crime against the law of the land. Policemen lined the track and listened to the hooligan uproar, yet nothing was done to stop it. The scandal was renewed with increased violence in London road after the match. Is it possible the Blue mob can do just anything and get away with it? Prompt official steps were taken to supress and prosecute the green brake-club lads who dared sing ‘The Dear Little Shamrock’ in Paisley Road. Yet thousands of foulmouthed and blasphemous orange ruffians are free to run amok over the East End of Glasgow. How do you account for it?” 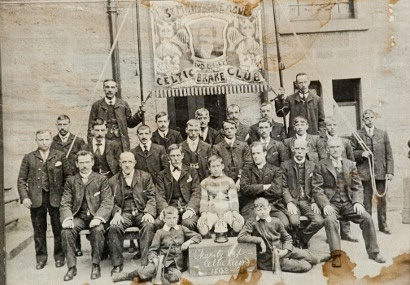 Man in the Know was somewhat more tolerant when it came to matters concerning the Celtic support:

There has been considerable outcry lately regarding the behaviour of certain brake-clubs, especially when visiting away fields. These complaints do not apply to the Celtic brake-clubs whose members, reasonable, sentient beings, are models of decorum and possess official testimonials to their blameless behaviour. They are out merely to enjoy themselves in their own way without infringing the law or interfering with anybody. They are fond of singing and to this no one can reasonable object.

On Saturday the boys sang to their hearts’ content. They gave us so many rousing choruses – ‘Hail Glorious Saint Patrick’, ‘God Save Ireland’, ‘Slievenamon’, ‘The Soldiers Song’… When Cassidy’s second goal made victory sure, it was fine to hear the massed thousands at the western end of the Ibrox oval chanting thunderously ‘On Erin’s Green Valleys’.

But, as I have remarked, the greatest scene of all was the homeward procession of the scores of beflagged brakes loaded with enthusiasts delirious with the heady vintage of victory. The most amazing and amusing ingenuity had been displayed in suitably inscribing the score on the sides of the various charabancs. No two brakes showed quite the same wording. The humourists got in much fine work and absolutely vetoed the simple legend – Celtic 2 Rangers 0.

We had Cassidy 2 Undefeated Rangers 0… then we had the semi-political allusions – Rebels 2 Black and Tans 0 and Sinn Fein 2 League of Nations 0, the latter a sly allusion to the cosmopolitan character of the Blue team.

It was a delight to see the boys so thoroughly enjoying themselves. It was their turn and they full use of it. Good luck to them, and to the team that gave them ample cause for rejoicing.”

Man in the Know’s match reports would almost have been rejected for the pages of NTV such was his cyclopic view of events. Campbell and Woods in The Glory and the Dream quote one example that followed a controversial 2:1 victory for the Ibrox side in 1920:

The evil didn’t take too long to show its venomous head: in his very first dash towards Robb (the Rangers ‘keeper) McInally was badly kicked, and for a time was only able to hop about on one leg. McAtee got a boot in the face, Gilchrist was laid out with an elbow, I think, after McInally had been taken away for good. Little McLean, going down the middle for the equaliser, was mercilessly thrown from behind and lay motionless on his face while the ball was wildly kicked into touch. The frantic kicking out tactics of the Ibrox defence pained many but surprised none. As kickers the Rangers’ rearguard could vie with the most competent of army mules; as tacticians they could give the Black and Tans a long start and a whacking. If there were to be any extension of the liberty taken by the Blue defence on Saturday the Rangers might as well arm their men with hatchets.

Inevitably the hate mail would wend its way to the newspaper, but Man in the Know was not to be tamed:

Anonymous letters, abusive in tone, are a regular feature and to these I offer no objection so long as the topic is football and nothing else. But a letter signed ‘Ibrox Blue’, reaching me this morning, is of a nature so scurrilous and ignorantly bigoted that I can only ascribe its origin to some slummy skulker of the underworld where bag-snatchers and razor-slashers foregather to devise midnight outrages and curse the Celtic. One has merely to glance at an Ibrox brake club to see that most of them are only half-witted. So let us forgive our anonymous assailant who is probably stung to raving madness by his favourites’ annual Cup humiliation.

“The failure of Rangers to win the Scottish Cup between 1903 and 1928 was fertile ground for ‘Man in the Know’s’ wit. Describing a league fixture at Celtic Park (won 1:0 by Rangers) he pointed out that one Rangers supporter had required medical attention at half-time as the Scottish Cup – recently won by Celtic – was being paraded round the track. Bitingly he attributed the spectator’s fainting spell to the unaccustomed sight of Scotland’s premier trophy.

He denounced the Rangers following for their behaviour at that particular match in these terms:

The blue-bedecked crowd at the Dalmarnock End earned fame of a kind by actually pelting with stones and clinkers the collectors, ladies and young boys included, who were carrying round the sheets for the Dalbeth Convent collection. The Blue following have many misdeeds to their credit, but surely this was the dirtiest. Let it never be forgotten that Rangers supporters stoned women and children engaged in a work of charity. The Germans never did anything worse than this and when the game and the players are merely a shadowy memory this shameful thing will be remembered.
(23 April 1927)

There is something humorous about his dithyrambic ranting at the injustices heaped upon his favourite team, but he was read widely among a community whose members felt they had reason to be aggrieved. A former Celtic director assured me: “Everybody bought the Observer just to read Man in the Know’ – and he was trusted and believed by those who read him.”