The phenomenon of delinquent behaviour among football mascots is not confined to these islands. Germany too has its fair share of nutters in It’s A Knockout costumes (Spiele Ohne Grenzen as they say in Deutschland) none more so than Grotifant, the KFC Uerdigen elephant. 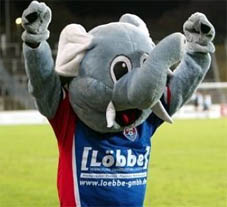 Grotifant became notorious in Germany when he was handed down a 4-month-ban a few years ago for attacking a linesman. The first match he appeared at after the ban was against local rivals Fortuna Düsseldorf. Some of the Fortuna fans got annoyed at his Paisley Panda/ Sammy the Tammy style wind-ups and ended up chasing him across the pitch. Grotifant escaped with his hide intact but ended up minus one ear.

A year later the Fortuna goalkeeper knocked him out during the return fixture.

A charitable soul at heart – battle experiences notwithstanding – he later offered to appear at any event of the buyer’s choice when he auctioned his services to the highest bidder on eBay. Expecting to turn up at a children’s party, you can imagine his reaction when he discovered that the highest bidder was a fan club of hard core Fortuna hooligans. 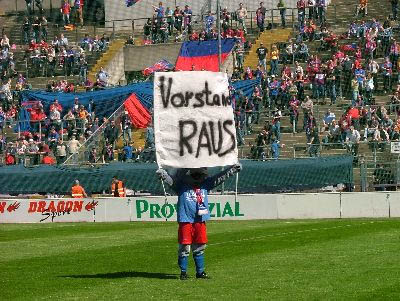 Grotifant holding a banner that reads ‘sack the board’. You can picture Hoopy…

This September the Grotifant – real name Andreas Boschek – surpassed himself when he jumped into the stand to retrive his head when it was pulled off by a supporter of his own team. Uerdigen had scored a goal and Grotifant climbed up on the fence to celebrate with the ultras, one of whom decapitated him. What was left of the elephant climbed the perimeter fence and a fist fight ensued. matters calmed down briefly when a second goal was scored but erupted almost straight after it when Grotifant was sconed by a plastic mug full of beer.

It’s just as well they weren’t playing Austria Vienna. Their mascot, Super Leo, was suspended last May for frightening the children by being too drunk to stand. Leo would have probably downed the beer. 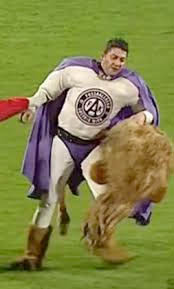 As they say in Uerdigen, keep the heid.