Imagine the surprise of Ulf Soeder, our Wurzburg (Germany) correspondent, when checking his daughter’s English homework recently when he came across the page below.

Headed ‘It Makes Me So Angry’, the page invited its early high school pupils to write two sentences in English about a selection of pictures. Lo and behold, picture 2 featured a hooped striker scoring against Rangers. The scoreboard indicates the Celts leading 2:0 already, so a real hammering is being administered (Note: the book was published before they ceased trading and went into liquidation). The almost lifelike image also features an Alan McGregor character between the sticks who can only look on as the ball whistles past him in a reprise of his Kris Commons moment, while an elderly defender arthritically hirples towards the striker making gurning faces and wheezing noises in a feeble attempt at putting the striker off. Davie Weir perhaps?

Prompted by the word ‘Celtic’ the German youngster wrote the sentences: ‘… are winning the game. They have just scored a goal.’ Grammatically quite correct, although I’m sure my reader (surely ‘readers’? Concerned Ed) (No, ‘reader’ – the page is entitled ‘singular and plural’ and I do know the difference – pedantic Earwig) could probably think of a few more apposite, not to mention pithy entries.

Indeed, when you consider the whole page, there is a certain theme running through it.

Question 1: ‘The boy’s jeans are too short. He is so out of fashion he is clearly a Sevco supporter.’

Question 3: ‘The ten o’clock news… is on TV. They are not reporting another court case.’

Question 5: ‘The furniture… has been removed from David Murray’s oak-panelled office in Charlotte Square. He is in serious financial trouble.’

Question 6: ‘The Police… are ignoring racist songs. I wonder why.’

As instructed, I’ll restrict my answers to part 2 to two words:
1. Most reporters.
2. Fat Sevconians.
3. Manchester rioters.
4. Except McCoist.
6. Sevco. 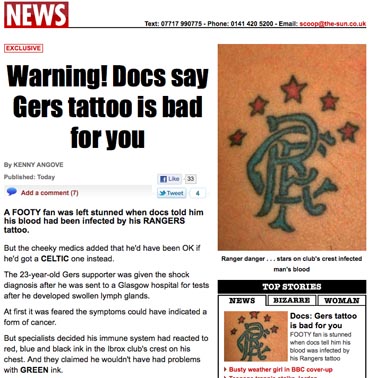 Were you as alarmed as I was when you found out that Charlie’s Camilla got herself tattooed while in Morocco? Obviously it’s the kind of thing you might do after one too many pints (so I’m told) but I was naturally afraid that she might have done something completely reckless and got a Sevco tattoo. I mean these things are bad for you. According to the Sun, it’s much better to get a Celtic tat as there’s nothing that can go wrong with green ink. The red and blue, by contrast, can react with your immune system and give you swollen lymph glands.