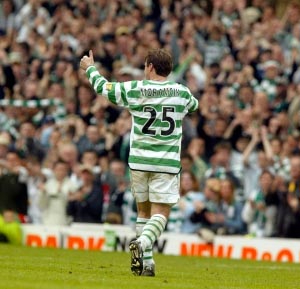 November 1998 – Stubbs wins the ball and plays it into the midfield. O’Donnell picks it up and sends Donnelly off down the left wing; he fires the ball across the 18 yard line, Larsson steps over it and a 33 year old playing only his second game for the club swings his left foot and takes the first steps to becoming a Celtic legend.

Lubo’s arrival could scarcely have been any more understated. Signed for a token fee from modest German club MSV Duisburg by a manager under pressure to bring in big names for big money he was ridiculed by a media blinded by ignorance and an insatiable lust for putting the boot into Celtic. His first home game was played in front of a crowd already hyped up by the fact that Jock Brown had resigned earlier in the day. The team responded to this atmosphere, and Dundee were crushed 6-1.

Lubo was at the heart of almost every worthwhile move, and spirits were raised for the visit of Rangers, at that time still in existence. “Ah, but…” the fonts of all knowledge in the media said, “that was only Dundee. Just wait until Sergio Porrini gets hold of him.”

The 5-1 game may have been irrelevant in the overall scheme of things that season, but it gave Dr Jo some much needed breathing space, and was the birth of the Lubo legend.

The common line spouted by hacks at the time was that Lubo spent most of his career “hiding in France.” What ignorant, arrogant nonsense. France in the 90s was no football backwater. Marseilles were contenders for the European cup in 1990 (semi finalists), 1991 (finalists) and won it in 1993. We certainly found out how good PSG were in 1995, and Bordeaux went from winning the Intertoto to the final of the UEFA cup in 1996 with players such as Zidane, Lizarazu and Dugarry. Oh, and of course the national team won the World Cup in 1998. All of this happened while he was “hiding” there. The French probably think Lubo spent the latter years of his career hiding in Scotland.

Moravcik was once asked, through an interpreter, what it was like to go from a zero to a hero. He told the interpreter “Tell him I was never a zero.” Under Dr Jo Lubo was the force that rebuilt the season. With his influence we began to play some very effective football, and looked good for mounting a late league challenge. At which point, of course, the rug was pulled from under us.

During a lovely 7 goal romp at Fir Park Lubo tore his hamstring, effectively ruling him out for the rest of the season. He did manage to make the Scottish Cup final, but he didn’t look match fit, and struggled to make any impact on the game.

The following season under the guidance of the ‘You Know Who’ dream ticket was actually a landmark one for the little Slovak – he picked up his first winners medal when we won the League Cup. It was just a shame that such an event should be tarnished somewhat by the fact this was a washout of a season. That would be put right by Martin O’Neil.

Under O’Neill Lubo was the X factor that won many games and his contribution to the treble winning team was huge. Not just with goals, but his general attitude was of a man who knew that his last real chance of glory was here and he’d better do something about it. Cue a second League Cup winners badge (surely worth more than the first) and a well deserved Champions medal. The icing on the league cake was his two-goal display at Ibrox.

Sadly his Scottish Cup injury jinx struck again when in training he sustained a cut above the knee. He made the starting line up, but had to go off when he stretched for the ball and opened up the stitches. But that didn’t prevent him from climbing the stairs and lifting the cup.

In his last season at Celtic Park he finally got his shot at the Champions League, first away to Rosenborg on an ice rink, and then at home to Juventus on a night to remember. In their midfield Juve had Pavel Nedved, who told the press prior to the game that Lubo had been his idol as a boy. He soon found out that such words cut no ice with the man, as Lubo nutmegged him in the opening 10 minutes. At 1-0 down Celtic were desperately fighting back into the game, Lubo gathered the ball on the right hand edge of the penalty box. He feigned to cross and cut back in no less than 3 times before finally planting an inch perfect cross on the head of Joos aValgaeren and we were back in it.
It was noticeable in that game that our scoring stopped after he went off.

Towards the end he was used less and less, perhaps not a reflection on any loss of form from him, but more probablyly to do with the manager realising that we’d better get used to life without him. Which was a shame.

Sadly he didn’t even make it on to the pitch for that year’s cup final. Martin O’Neill had told him to get prepared for extra time, but that didn’t happen. Predictably the media attempted to stir up some leaving under a cloud nonsense.

He went to Japan with his old mentor Dr Jo, leaving Celtic with two league championship medals and two league cup badges. On his 50th birthday he reflected on his days in the Hoops: “My favourite time, my most special time, was at Celtic. I spent more than three and a half years there and I couldn’t have asked for more. People appreciated me and, maybe, some fans even loved me. They said I was a ‘gift from God’ but it was the opposite – Celtic was a gift from God to me. Celtic is unique. I left the club in 2002 but I haven’t been forgotten. When I am on holiday in Spain, playing golf, the Celtic supporters approach me and ask for a photo or to talk about Celtic. It still amazes me. As a kid growing up I wanted to play in the World Cup for my country. I was then lucky to play in an Old Firm game. We beat Rangers 5-1 at Parkhead in 1998 under Dr Venglos. When the Champions League started in 1992 I wanted to play in it for a club. Celtic gave me that opportunity. The most memorable occasion was when I played against Juventus in the Champions League. We won 4-3. Martin O’Neill gave me my first start in that tournament. I made the most of the moment. I was subbed near the end and I will never forget the standing ovation I received from the Celtic supporters. I am very lucky. I was never a big goalscorer during my career. I scored some nice ones but there isn’t really one that sticks out for me. It really is hard to choose. I enjoyed setting up my team-mates, whether it was with my right foot or my left foot. I know Henrik Larsson, Chris Sutton and John Hartson appreciated it. That made me feel happy.”

It was a privilege to have watched him.

And some words of wisdom from the men who truly know everything there is to know about the game:

“I don’t know what I find more laughable; the fact that Celtic cannot find £500,000 from their biscuit tin to sign a proven talent like John Spencer, or the fact that they then spent £300,000 on one of Dr. Jo’s old pals, the unknown Lubomir Moravcik!”
Hugh Keevins, Sunday Mail; Nov 1998

“Josef Venglos will live to regret his decision to play this unknown Slovakian ahead of Mark Burchill in such a vital Old Firm Game.”
Derek Johnstone (1998)

“If anything the signing of Lubomir Moravcik at a cut price has merely caused them further embarrassment.”
Jim Traynor (1998)